The Usual Stuff, and New Boats. 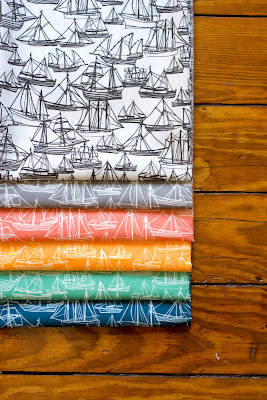 When you move, your life becomes about nothing but moving for a week or so, and then it becomes all abut unpacking, and then it becomes about avaoiding packing but realizing you need a lot of the stuff that is still packed. I am in a pretty much constant state of inconvenience, my friends. It took me two days to find my rotary cutter, and I just gave up and bought a new cutting ruler. (But it is SOOO much better than my old one, so that counts as a victory.) Anyway, these pictures should have been taken a week ago, and they should have been posted a week ago, and I should have exclaimed a week ago LOOK! BEHOLD! COLORS! But I will do it now, because better late than never, eh? 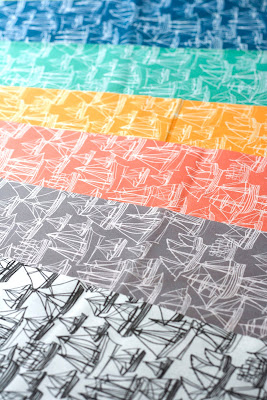 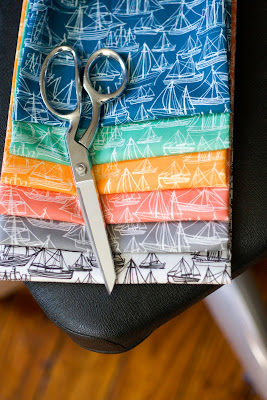 LOOK! BEHOLD! COLORS! Really, I am pretty enamored with these colors, and I am hoping to use them for a quilt in the near future. I think one of my favorite thing about the boat fabric is how gender-neutral it is, and how cute I think it would be in a baby quilt. And I am sorely overdue in making a baby quilt. EDIT: FOR A FRIEND! Who is NOT me. 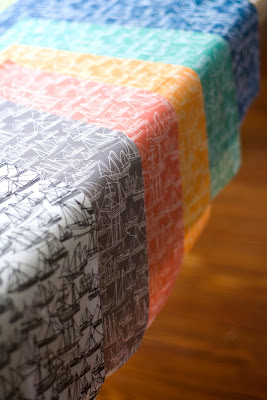 So, colors, yay! And I am offering the option of "fat sixths" which I am not sure is a thing that exists? But it is a yard printed with 14" x 18" sections of all six colors that the boats come in. I thought it would be a good option for folks who don't need a whole lot of each color, but wanted the variety. So everything is right here in the shop, if you are so inclined.

Going back to the unpacking... I stink at it. I have been wearing the same clothes for two weeks because I am too lazy to unpack the rest. Shows just how much I need all of the things I own, right? And one of the worst things about this whole house-moving-thing is the fact that while we are constantly being confronted with HOW MUCH STUFF we have (too much) we are simultaneously obliged to buy MORE stuff. House stuff, that you don't think about. Toilet paper stands, and fencing, and a garbage disposal, and a lawnmower, and furniture that will HIDE all of our stuff. We were spoiled before by having the attic space where we could stick any stuff we wanted to not think about, but now we have a closet shortage, and can only put things in the basement if we don't mind those things smelling like basement. The battle continues. 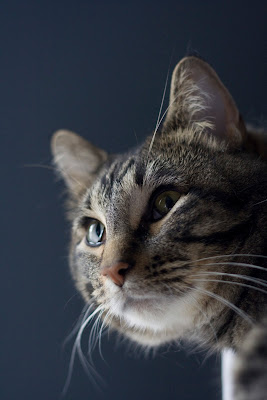 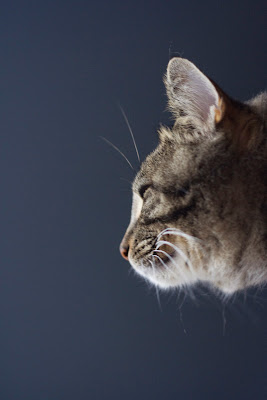 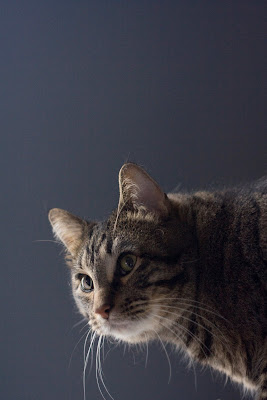 But Baxter is just as adorable as ever, and is MIGHTY photogenic against the new office wall color.
Posted by Auntjune at 12:35 PM

The orange and grey (and Baxter) are beautiful. How are the fur-babies doing in the new house?

Ah! Lisa, thank you! I didn't even realize, but I changed it. No small humans for me yet!

Love the new colors! And Baxter is a sweetie. I have fur babies, too ... they are each such individual personalities :-)

The new colors are gorgeous. So is the new office wall Color. Love it! Jenn

Nice edit. I think this would make a lovely quilt, esp the pink, gray and white together.

When we moved in here, 28 years ago, and - so efficiently - had the gas cooker connected at once, it still took us ten days of cooking on a camping stove because we couldn't find the cooker's burners - in a plastic bag that had slipped down the side of the sofa, in fact.

It will all get better in time, you'll see. Your colour is gorgeous, and even better with Baxter.....

BTW - did you mean to have that Chinese sex-advert comment on your blog? If so, fine, if weird. If interested, pop it into a translator and see what you get. Bet it's got nothing to do with paint charts or Baxter......

my favorite colors of the boat fabric are the pinkish, and the orangeish color! I know how you feel about the moving thing. My husband and I have moved 6 times since in 18 years. We are not planning on moving again! Sooooo much work! and your life is definatley inconvenienced throughout the whole process! hope it gets better for ya soon...i enjoy reading your posts!

i love the new colors! that orangey-yellow color is divine. and speaking of your awesome ship fabric, i wrote all about you over at my blog:

thank you again for being super sweet and amazing.

p.s. your cat is a serious looker.

Robyn of Coffee and Cotton said...

Happy you're getting settled. I love the fabric!