Mug Rugging. (And My Nursing Career.) 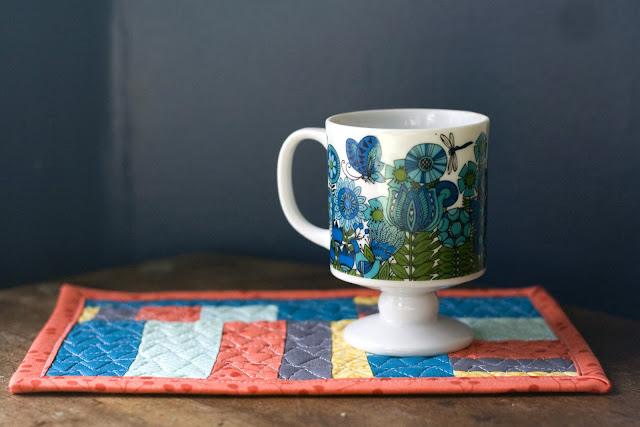 No one has ever, ever, ever said to me that I should be a nurse. When I was younger, my father had this insane idea that I would be an ophthalmologist, I guess the reasoning being that surely people who have eye surgery will grow up up wanting to inflict it on other people? I don't know. In any case, but it became clear pretty quickly that it was nevahevahgonnahappen, firstly because I am a FAINTER; secondly because I am not the type-A, competitive-studying, workaholic that it requires; and thirdly, because I am not what you would call nurturing. I am not UN-nurturing, and I don't lack empathy, but it's just not a trait that I ever really display. (At some point, my father started hoping I would become a lawyer. Poor guy. Eventually he'll get used to the fact that the golf-course retirement I promised him when I was five is probably never going to materialize.)
WHAT is the point of this, you might ask? Well, friends, this week I am playing nurse. My poor husband had a tonsillectomy/UPPP (because apparently he has giant freak-tonsils), and this equals a long, miserable, painful recovery. So my duty as wifey, which I gladly accept, is to be nurse-y. My job mostly consists of refilling the humidifier, administering pain meds in magic-red-liquid-form, pushing apple juice and jello, and attempting to come up with remotely tasty, non-acidic, non-sticky preparations of mushy ramen. I am honestly not-sucking at it, I think. I would say that perhaps my inner-nurse has come out of its dormant phase, but just the thought of actually looking at the healing tonsil-scars makes me pukish, so probably not.
But I digress. Or, am I disqualified from having digressed, because I was never on topic in the first place? Wow, I'm digressing again. Or for the first time. STOPIT. 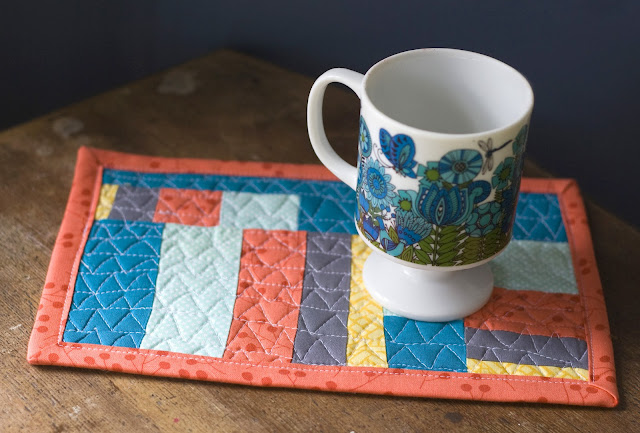 Mug Rugs! KCMQG had a mug rug swap, and I didn't plan on doing it, because to me swaps = PRESSURE, but then I got my fabulous new feet, and I wanted to play around more with free-motion. So I made one in about an hour, and it was deeply satisfying though definitely not perfect. 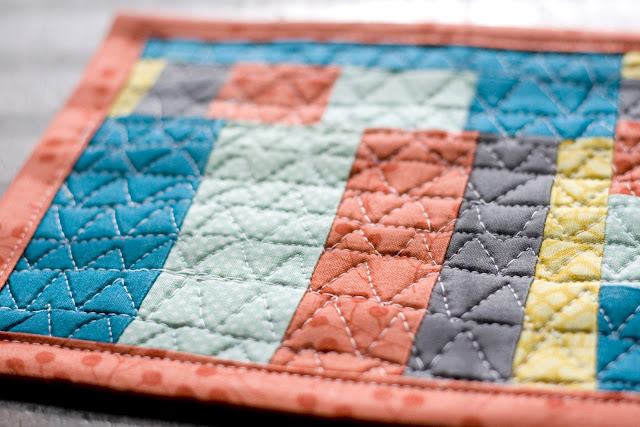 I improvised. I am not a big improviser (to my shame!), but I did it. Woot. 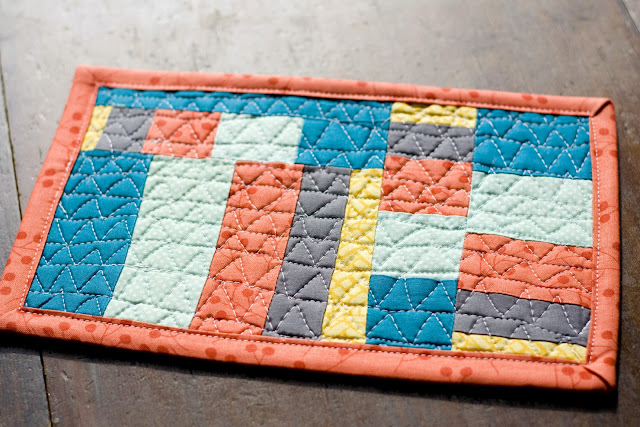 And I haven't taken a picture of it yet, but I received an amazing mug rug that was PERFECT for me, because it is a rainbow. I looooove rainbows. If you know me, you know this. Left to my own devices with unlimited time, I would probably arrange everything I own in color order. H'Anyways, I'll take a picture of her Mug Rug later, if I don't forget. If I do, I'm sorry; it's my nature.
Posted by Auntjune at 1:40 PM 2 comments:

So, you know when people find awesome stuff at estate sales/thrift stores/garage sales, and they tell you about it, and they're very apologetic that it wasn't you but also kinda smug because it WAS them? I hate that. And now I'm going to do it. Soooooreeeeeeeeeeeey. 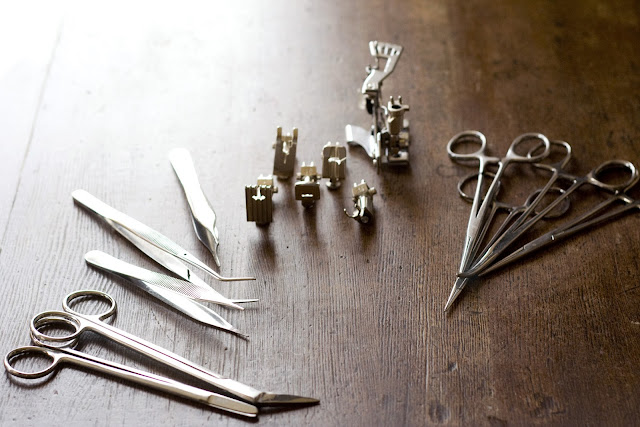 I don't go to a lot of estate sales, because I am both poor and lazy and hate to leave the house. Hermit! But I do like to cruise craigslist for good ones, and my favorite search terms are vintage, fabric, and Bernina. So when a listing pops up with all of these delightful terms, and happens to be conveniently located and scheduled, I just can't keep myself away. This sale had all of these things, and so not only did I drag my lazy-poor-hermit self out of the house, but I showed up at the sale WHEN IT OPENED, and WAITED IN LINE and ALMOST DIED FROM THE MOBBING. That last one might be an exaggeration, but I did get jostled by some potentially unsavory characters and experienced a marked rise in my blood pressure. So. 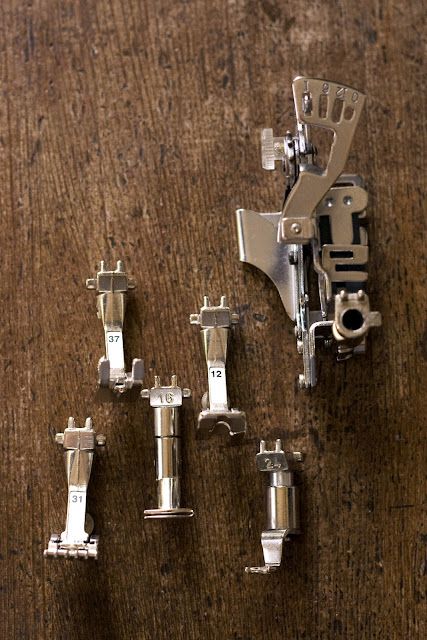 And it was rewarded, but not how I expected. I was anticipating mad stacks of vintage fabrics, and hoping to find a decently priced a sewing machine for a friend of mine. Thumbs down for both of those, but perusing the button/notions/junk table, I found a small tin box full of SOLID GOLD. And by that, I mean brand new, in-box, old style Bernina sewing machine feet. $5 each. And a ruffler. $15. WHAT.

And I had been wanting a #38 for a while, (since Jaime discussed different feet on her blog last August), but the others were not feet that I would have really thought much about. But, dude. When you put on a new foot, it's kinda like, oooh, what does it doooo? And then, when it does the thing that it's made to do, it changes to Looookie!! Look what I can DOOOO!! And a mazillion new projects pop into your head, because think of how much EASIER they will be now, and how AMAZING they would look with pintucks or ruffles or piping! It's intoxicating, the new-foot-feeling-of power.

If you had asked me a few weeks ago if I wanted a ruffler, I would have said, Eh. And I almost didn't buy it, because I am not the ruffle type. But I did, because I knew it was a good deal, and who knows? It turns out, I LOVE RUFFLES. I am a ruffle-holic. I want to ruffle everything. It is tricky to put on, and it makes a horrible sound, and it is really quite menacing when it's doin' it's thang-- but it makes these amazing, tiny, perfect ruffles. I could make them all day long. I'm open to suggestions of things to make that consist almost entirely of ruffles.
And, ok, the open-toed free motion foot? Incredible. If you do free motion, and you have a closed-toe foot, try one of these things. I have never been very good at free motion, but I spent an hour just practicing on the night I first tried it. And the quarter-inch foot! Ack! I knew they weren't perfect, but never realized EXACTLY how NOT quarter-inch my seams were until now. They were VERY NOT.  Which, whatever, but now, they ARE (ish). 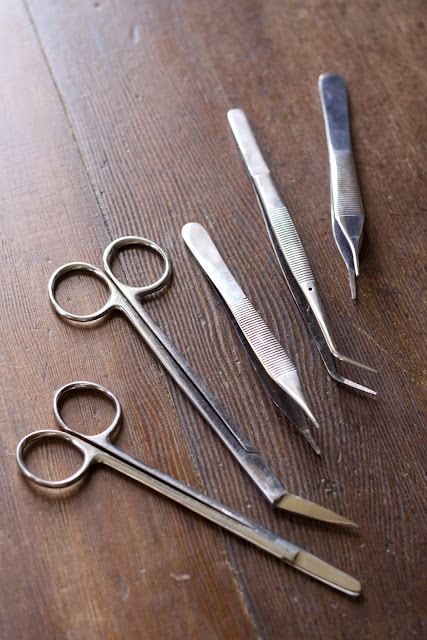 Also, there were little scissors and tweezers and some vaguely surgical-looking things that I don't know the names of, taped together in bundles of $3 and $4. I can pull so many tiny things through so many tiny spaces now, you don't even know. 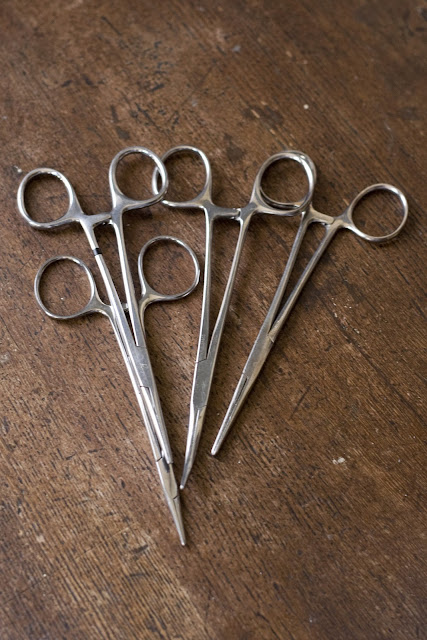 I picked up a few more goodies, but they'll have to wait for later posts. This post has already reached blogger's gloating-limit. Leave your own awesome-thrift-find story in the comments, and I promise to feel jealous and secretly resent you when I read it.