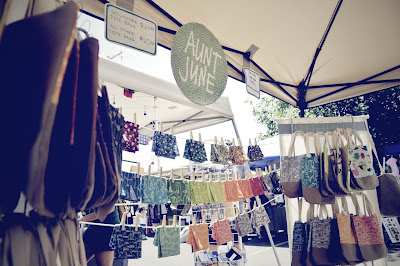 This summer, it is killing me. In an awesome way, though. Is that possible? I've been unpacking and sorting and staring blankly into our room of shame, (the front room that is full of unpacked boxes- what can possibly be in them?) and painting and obsessing over paint colors and doing crazy pre-craft-show sewing, and I have neglected my little old blog. Which, to be fair, I pretty much always do, but I REALLY WANTED to be better about it this summer... I need a timer that will go off five days after every blog post that says "You must post today, or you will have extreme blog shame the next time you do." Which is a lot of words for an alarm, especially since I don't know of an alarm you can program to speak. Does it exist? If not, someone needs to make it fast, it is the next great iPhone app. 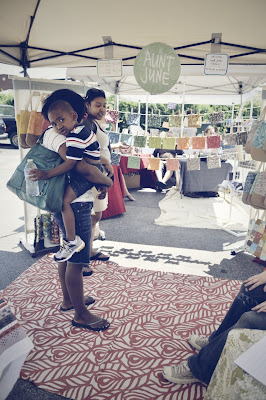 I left the room and forgot where I was going with that last paragraph, but I'm pretty sure that it was nowhere, so MOVING ON. I've been doing a of of craft shows, which is fun, except that the night before every show, I get some GREAT NEW PRODUCT IDEA that I MUST MAKE 20 OF before the show. It is a sickness, and I cannot say no to the urges, and so I usually end up getting to sleep at around 2am on the nights that I need to wake up at 6am. I am an angry person when I have only slept four hours, my friends, an ANGRY PERSON. I throw purring kitties off of my and spit in the faces of children. (Not really. Well, at least not the second one.) NOTE! Photos of Honeypot Shop courtesy of Melissa Lin Ellis. 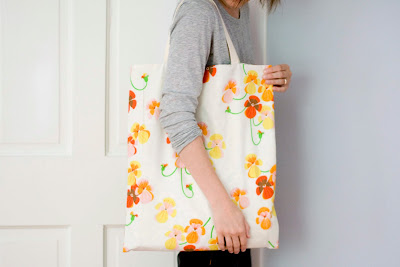 The upside, though, is that I end up with a bunch of new stuff, which I have been starting to put up in my etsy shop. My favorite, super-easy new things are the Vintage Sheet Shoppers because they are SOFT and PRETTY and look SO much cooler than all my other cheap grocery bags. You have served me well, giant Aldi's bags, but you do not have flowers on you! Would anyone be interested in a tutorial-thingie for these bags? It's really, really simple, so I don't want to insult you, but is there anyone who might want something like that? Let me know. I do wonder what the asian-sexy-lady-bots who have invaded my comments section will think. 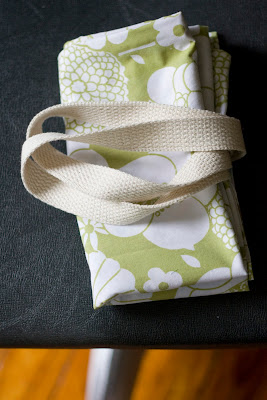 I have been spreading myself all around the internet like the proverbial Cheez Whiz, so iffin' you want to, you should check out the interview I did with Jeanee of Dirty Laundry on etsy and the Dirty Laundry blog. Seriously, how cute is EVERYTHING that Jeanee does? She's a Hallmark girl, and I love her fizzies, especially the "Pretty Pomegranate". I don't want to sound like a commercial, kids, but this stuff is awesome, and it's on sale for super cheap right now, and her packaging and everything is just BEAUTIFUL and they make great gifts, So, whoops, I pretty much am a commercial. My mom got one for Mother's Day. True story. Boring, but true. So, anyway, read the thing where I answer questions if you like that sort of thing, but definitely check out her etsy store. $4! End commercial.
Ok, what I looooooooooooove more than anything is seeing things that have been made from my fabric, so I was overjoyed to see this post by Sonia of Cozy Memories, (By the way, Sonia lives in France! My fabric is in France! This is the classiest I have ever felt!), and it finally got me to do something I have been meaning to do for a while: I started an Aunt June flickr group. So, post your photos of items made with Aunt June fabric, and JUST FOR POSTING you will get 10% off your next fabric order! Just send me a convo before you make the order, and I will set up a special listing for you. It's a pretty sparce group right now, so if we could fill it up, I'd be most delighted.

And need I remind you, KC peeps, that the Ric Rac Roundup is just around the corner? Next Saturday! Merriment to be had by all! And if not merriment, Sno Cones!
Posted by Auntjune at 8:10 AM 10 comments:

And I Forgot To Mention... 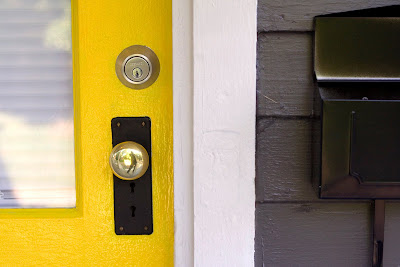 I also painted the door. He knew about this color choice, so it was not a shock, and I think it looks quite lovely. Bright, but lovely. At this point you probably think that my house is absolutely insane, but most of the other walls have been painted/will be painted gray, so these are the major "pops" of color. Is "pops" of color out of style? I've heard that "accent walls" are outdated, but "focal walls" are all the rage... Oh, designers, you so cray-cray. 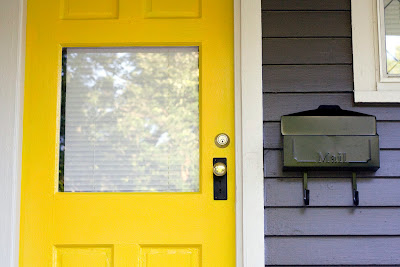 I also wanted to mention that mon amie Rebekah, sister of Raych and maker of aforementioned hippo cards, is giving away some art fabulousness. She is entering a contest, and needs to know what you think she should enter.. sound familiar, bloglings? Anyways, you should help her out, you might WIN something!
And, speaking of contests, I did not win the Spoonflower contest, but I was 5th, which ain't half bad! So thank you all SO much for your votes and love and the brownies you are going to send me. Right? RIGHT???
Posted by Auntjune at 10:42 AM 14 comments: 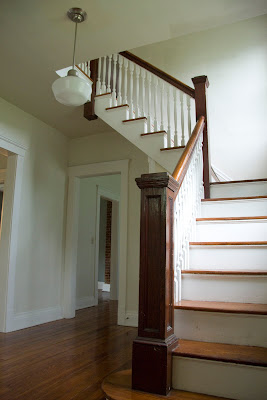 Here's the before, mmkay?

So, Your husband had to leave town on a fancy-pants business trip, and you have an idea. Or, the beginnings of one. An idea-fetus, if you will. You decide you will PAINT something, while he is gone, to surprise him! How could that go wrong?!?! Because, this is what happens when you watch too much Design Star and spend time with Jenny. You get these IDEAS, like painting your hallway in a wacky way, and you go to the paint store, and 30 minutes later you walk out with nothing you came in for, and three test jugs of peacock blue paint. For the tallest wall in your house. And you think, well, I won't paint THAT wall yet. But then you get home, and you open them up and they are PRETTY and the brush goes in and as SOON AS IT TOUCHES THE WALL you realize you have made a major tactical error. 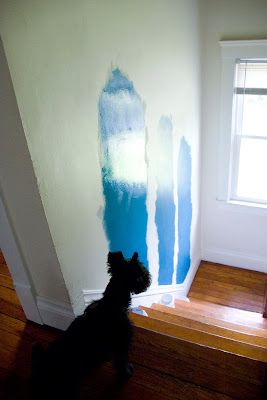 Because now you have to finish.

For, you see, you have put a random splotch of blue on the largest, most visible wall in your house. And if husband comes home, and all you have is three sad swatch-splotches, he will NOT think, "Oh, my wife is so creative and surprising", he will think, "When is THIS going to get finished?!?!", and it is a problem. And another problem is, this wall is TALL. 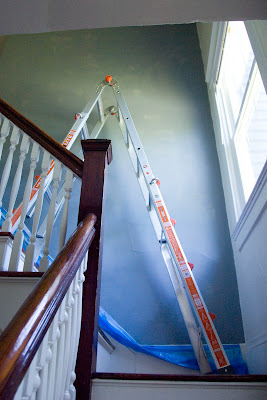 Like, two stories. Like, ladder must be in extension mode (not shown, much more precarious,) before you can get anywhere NEAR the ceiling to cut in. 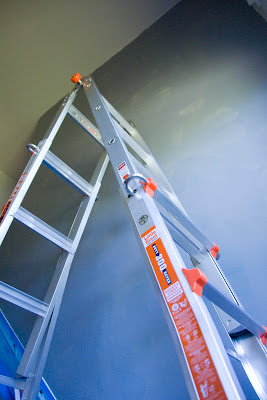 And have I mentioned that when you chose which paint you wanted from your samples, it was the only one that required primer, and so you must do TWO steps? And that, also, that specific paint doesn't come in the Classic99 you would normally buy, but only in the $30 kind (And $30 is with a 25% discount.) At this point, your little brain is spinning, and you want to give up, because you are tired, because, did I mention that just two days ago you were selling stuff at a craft show in 90 degree weather and you assembled and took down your own tent? Because you are a two year old? And cannot accept help or admit that you cannot do something by yourself? BECAUSE YOU ARE RIDICULOUS?!! 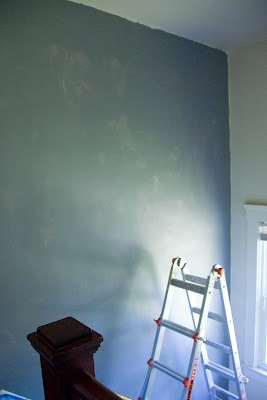 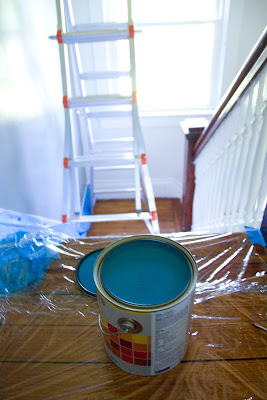 And then, when you finish (the next night, at 9pm, after working on it for the best art of two days,) you realize, suddenly, HE MIGHT HATE IT. 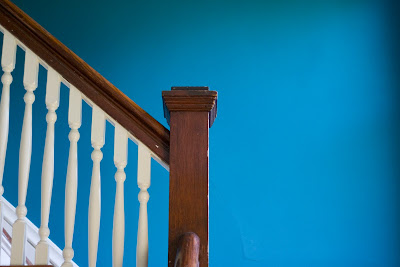 Because you have never even MENTIONED peacock blue to him. Ever. And while you are typically on the same page, design-wise, there is also a chance that this will be too much for the man. Just too much. And the thought of painting over your beautiful wall makes you want to hurl, because it was HARD TO PAINT. Like, very hard. Painfully hard. Occasionally crying-hard. And, it has flaws, but they DO NOT MATTER, because it was SO FRICKEN HARD that anyone who might point out those flaws will be promptly asked to leave. AND WHAT IF HE HATES IT?!? 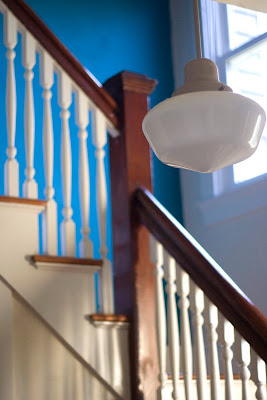 But he does not! He LOVES it! And was SUPERIMPRESSED by your super-human painting skillz! Joy! Triumph! And now you have a beautiful new wall. It doesn't matter if you ate nothing but Froot Loops with Marshmallows for two days and smelled like a rotting beast for most of the second.It was worth it, my friend. It was worth it. 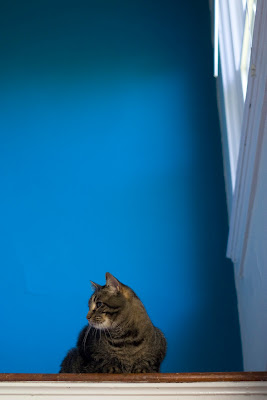 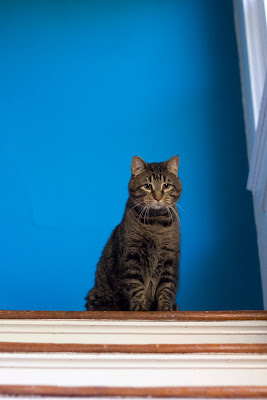 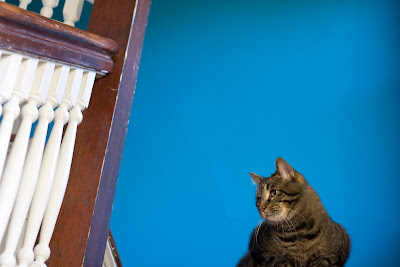 (And if you wondered what Rufus does when I am taking pictures of Baxter, here it is. 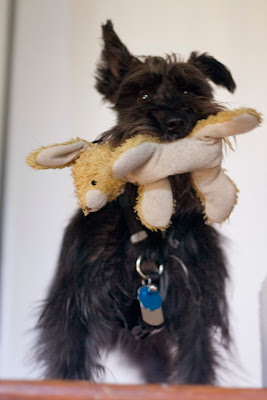