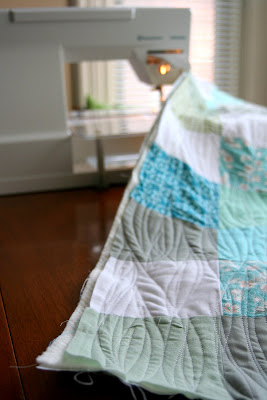 You all are so sweet. Really, if you're willing to read the nonsense that comes out when I type I feel like I should buy you all ice cream. And not only that, but you also uncover the subconscious meaning behind what I do- Cami, I am TOTALLY addicted to Tetris too. I keep an original Gameboy at my bedside, and the only game I own is Tetris. Also, B and I just got Boom Blox this weekend, which is amazing, because it's like REVERSE Tetris. And with all this video game talk is it a suprise that my quilt is sill unfinished? Tragic. 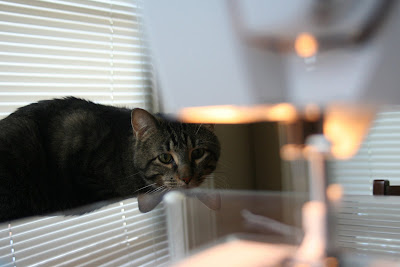 But TBV has been put to some use. And I'm not the only one around here who is in awe of his machine-power, as you can see, my sewing assistant is quite smitten with him too. 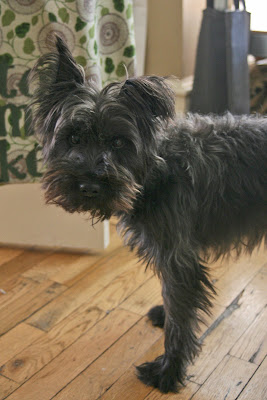 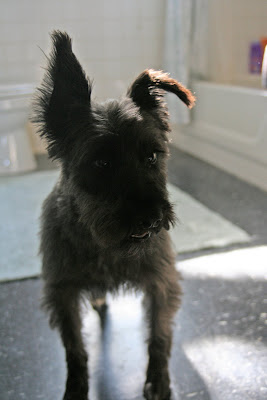 And have I mentioned, we got a new dog? This is Haircut Rufus. As you can see, he is an entirely different breed of dog than Normal Rufus. We miss the bushy mustache, but it will grow out again soon. 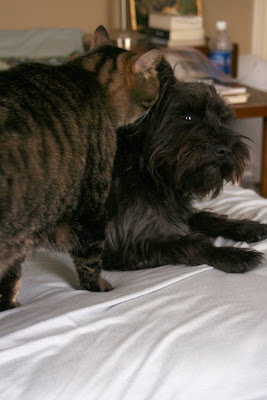 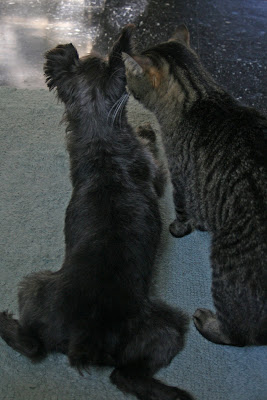 Oh, Baxter, what secrets are you whispering into Haircut Rufus's ear?
And speaking of secrets, who wants to tell me where and what the best stuff in Chicago is? We're taking a trip there on Thursday, and so far our itinerary consists of Ikea and the Aquarium and hopefully Pete Cuba's apartment (What say you, Peter?), so we could use a few more suggestions. Craft stores especially, wink wink.
Posted by Auntjune at 5:24 PM 12 comments: 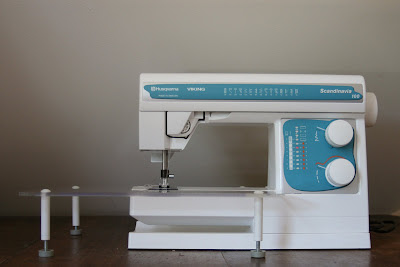 Oh, my. I need to introduce you to the newest (unnamed) member of our little family, whom I will refer to as "the beloved viking" or, for brevity's sake, TBV. Isn't he lovely? I think it's a him, but I don't really know, the one thing that I wasn't taught was how to check the machine's gender. Anyway, all silliness aside, here is the new machine, all shiny and nearly new and AMAZING, and sold to me by the nicest people on th planet, one of whom happens to be my Aunt. Which, speaking of aunts, does anyone want to know about why I named my blog Aunt June? Well, it doesn't really matter, because as long as you continue reading, that is what you will find out. When I was in college I had to do a boutique branding project in a design class, and my fictional boutique was called Aunt June, and so when I opened my etsy store, I planned n using all the pre-done design for the store, which I never ended up doing (lazy), and writing little bits of wisdom from my fictional Aunt June on the tags that would go out with my items, which I also never did (double lazy). But the Aunt June character was to be the fictional aunt who teaches everyone to sew, which is rather funny to me now, because at this stage in the game, I realize that I have a REAL Aunt, who, if we did not live 2 hours apart, would totally have been the person who taught me to sew. Har. It's funny to me anyway. But my real Aunt Barb, who is an awesome quilter, and was sweet enough to teach me how to use the new machine and give me a ton of her fancy sewing swag, doesn't chain-smoke and curse like the fictional aunt. Anyway, pretty lame explanation, huh? This is why I don't normally do the words part of blogging.
By the way, I absolutely LOVED the tales of sewing mayhem that everyone posted based on my last post. I so want to make a comic or a zine of all the terrible sewing mishaps people have had, all the silly crafting injuries that only other craft people really get. I want to do it, see, but come on, you know the story by now. Triple lazy.
I will leave you with photos of the first quilt to be started on TBV, hopefully soon to be for sale online, tentatively called the "Big Stair" quilt. Better name? Anyone? 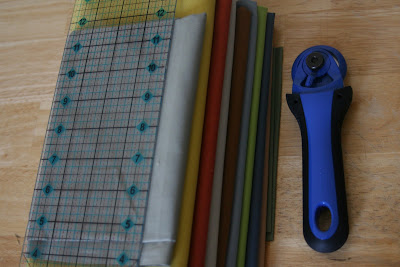 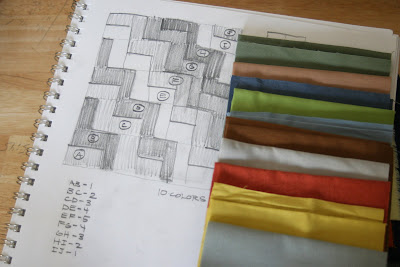 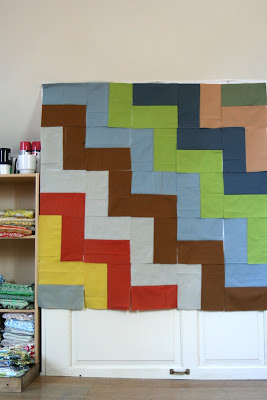 Stills From the Abandoned Craft Room 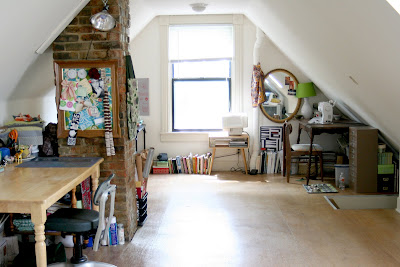 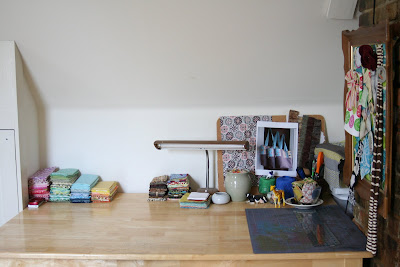 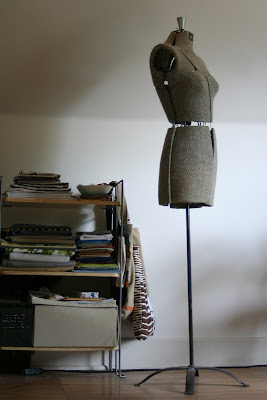 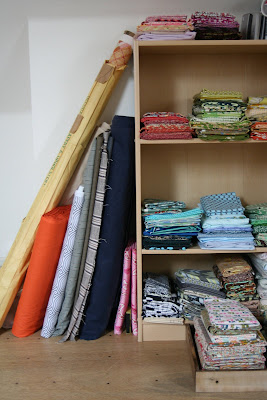 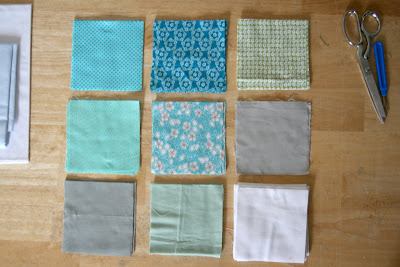 I know I should be up there more, but now that I know the new sewing machine is coming, it's hard to manage on the old Brother... Poor machine. I'm not being very fair. And I know I am going to be kind of terrified to use the new machine, because I am SURE that with all the added speed and power, I will sew through my finger. Knock on wood people, because I have been seeing it happen in my head for the past few weeks, speeding through multiple layers of quiltage like butter, laughing recklessly, like people in movies always do before car wrecks, and then blood squirting across the room, and Baxter running to chase my severed finger. Not that a sewn-through finger would be severed. But it makes for more exciting nightmares. Anyway.
Posted by Auntjune at 3:43 PM 5 comments:

My House Is A Mess, or, Artful Piles.

Usually I kick away or otherwise remove all the day-to day pileage around the apartment, but this last Sunday I was so lazy I decided I would just photograph the piles. It's kind of fun, feel free to join in! 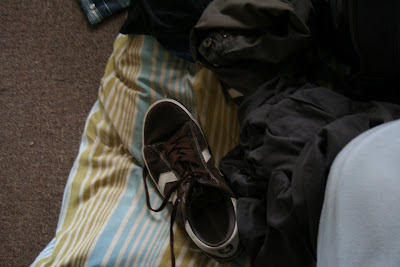 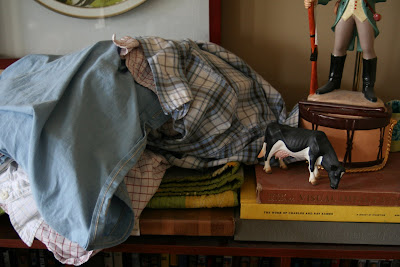 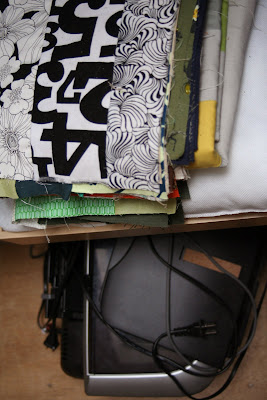 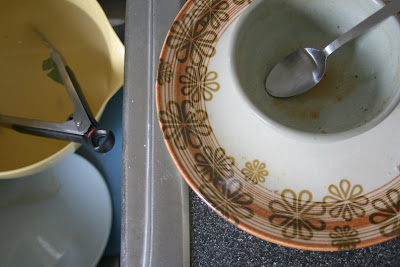 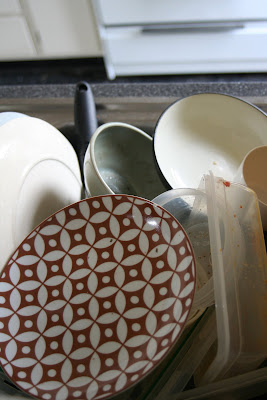 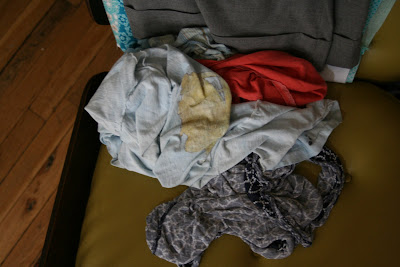 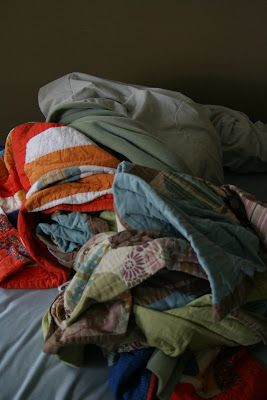 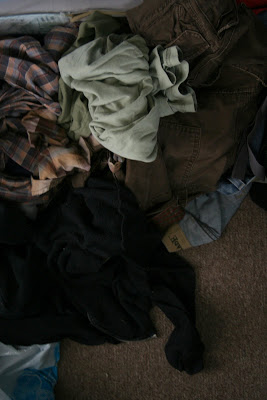 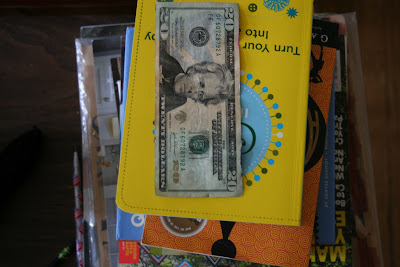