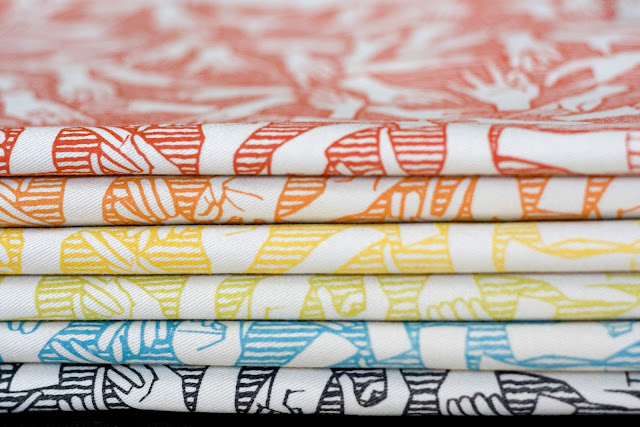 Ok, so this fabric has been in the works forrrrrrrEVER. Gestation period of an elephant, folks. Back story, commence! 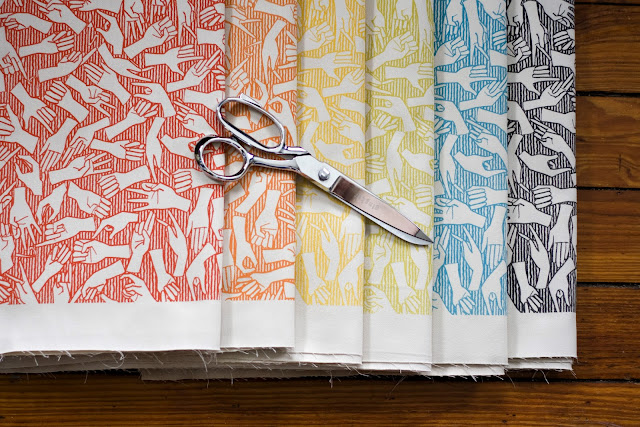 When I was a kid, I saved up for months to buy an ASL (American Sign Language) Dictionary. I had this idea that I would buy it, become fluent, and be super-awesome. I had a lot of these scenarios in my head when I was a kid, and I don't know where some of them came from. Weaving Kente-cloth! Making pottery out of mud! Learning Egyptian hieroglyphs! I was weird and dorky, and spent a lot of time alone in my room, none of which I regret. 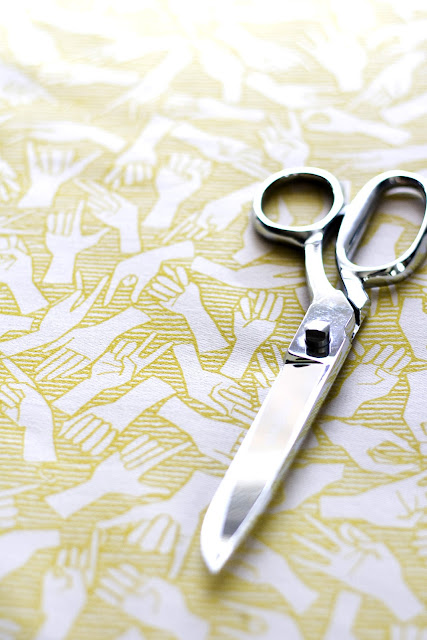 But, back to the story- I learned to fingerspell, (or the ASL alphabet, or Visual English) and would do it when I got bored, secretly spelling the words  being spoken to me as fast as I could. I'm sure I was sloppy, and most likely wrong, but as it was never actually used as communication, it didn't make much of a difference. 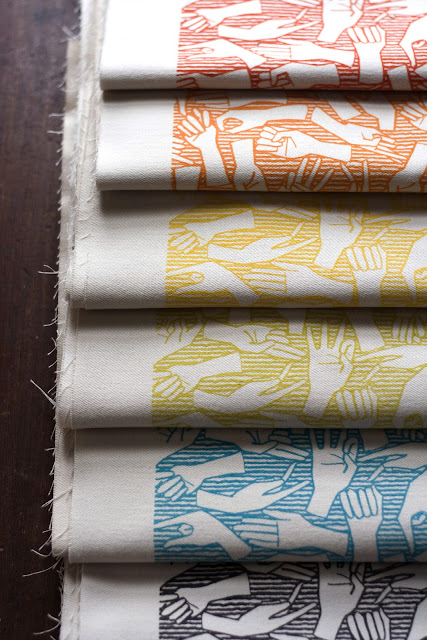 As far as signing actual words, though, I didn't get very far. Firstly because I am INFINITELY better at starting things than following through with them, and secondly because I didn't actually know anyone who used ASL. Learning a language is difficult enough, but becomes exponentially more so when you only have yourself to "talk" to. Muscle memory (like they say, riding a bike), is powerful, though- so the alphabet stuck with me. 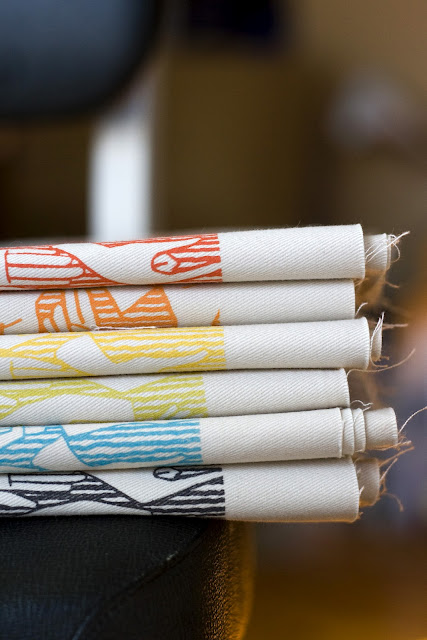 So over a year ago, I drew out this ASL alphabet, scanned it, and then abandoned it. I was working other more "pressing" designs, and so it sat. But when I decided to have some fabric screenprinted for the etsy shop, I knew that this was the design to start with. I love the many different hands, the subtlety and gracefulness of the gestures and how they play together. They communicate; they are a sign, they point to meaning. (But they don't spell anything. I checked: gotta be careful with random letter placement. 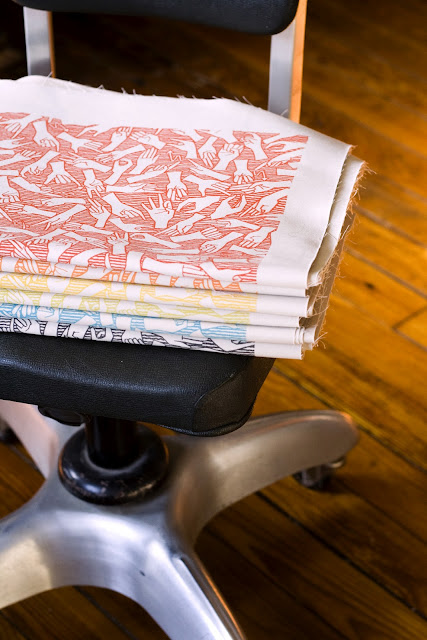 So here it is, my first foray into the world of screenprinted textiles! I'm kinda partial to them, so I hope you dig them, too. Info, including size and care instructions is located on the etsy listings. Six colors are available, though the supply of some colors is fast dwindling. The prints were hand screenprinted right here in scenic Kansas City by Printosaurus, fine folks as well as fine printers. Check 'em out.


And in other news, I am currently sitting at 999 etsy sales, which means it smells like giveaway time. The 1000th (non-calendar) customer will be getting a little something extra, and tomorrow (or thereabouts) I'll be giving away a cute little something I've whipped up here on ye olde blogge! (Yeah, that's how medieval villagers spelled blog. I dare you to find evidence to prove me wrong.) 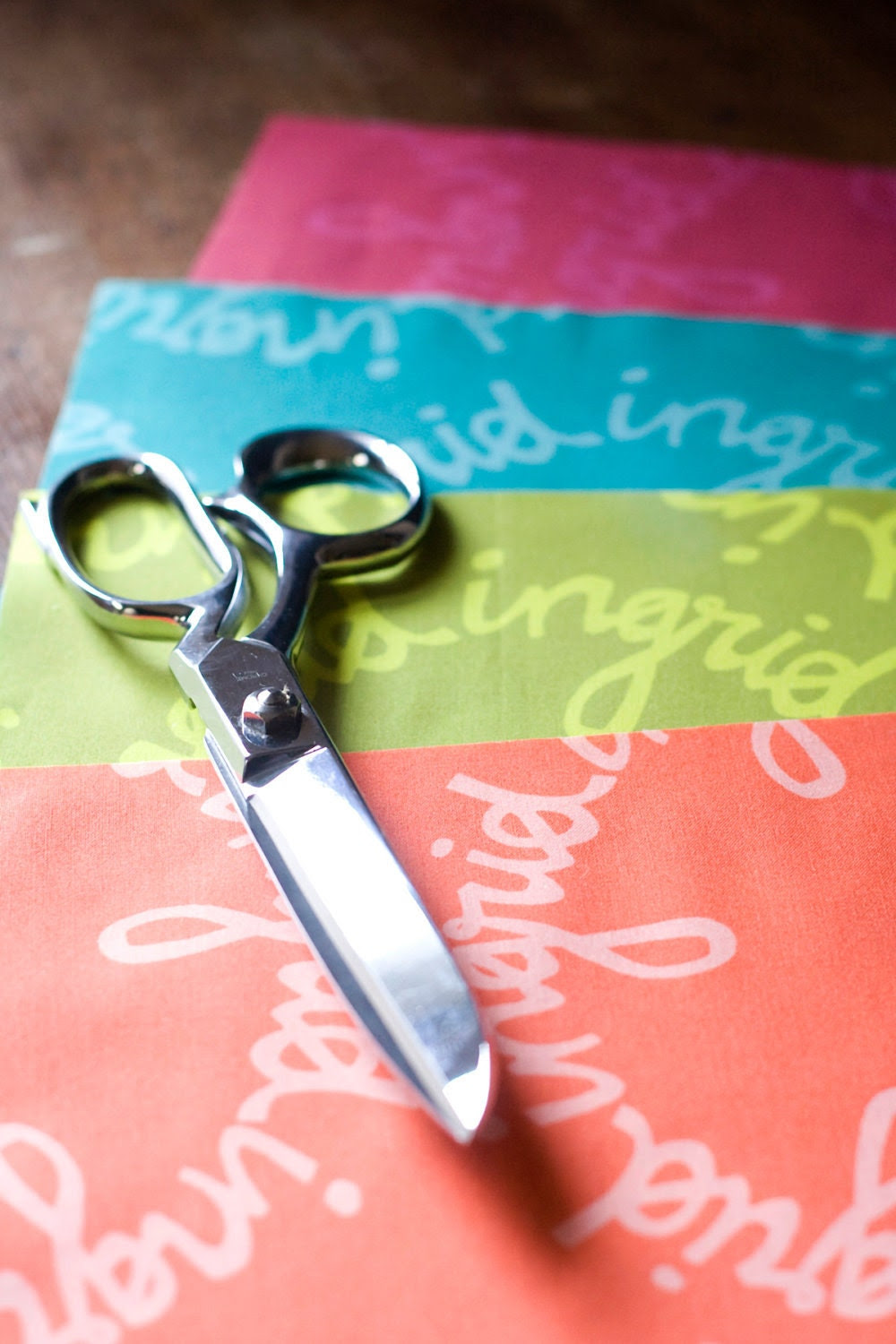 I have been living under the illusion that I had posted about this before, but I guess I hadn't. Turns out, I have written MANY posts in my head that never manage to crawl out of my head onto the interwebs, and have been blissfully unaware of their non-existence. Whatevs.

But anyways, this one is cool (I think) and REALLY overdue. So, in August 2010, I opened a second etsy store, And Your Name Is? which I briefly alluded to here, and the Lovely and Talented Shea Henderson of Empty Bobbin Sewing Studio mentioned here. (HYPERLINK ATTACK!) 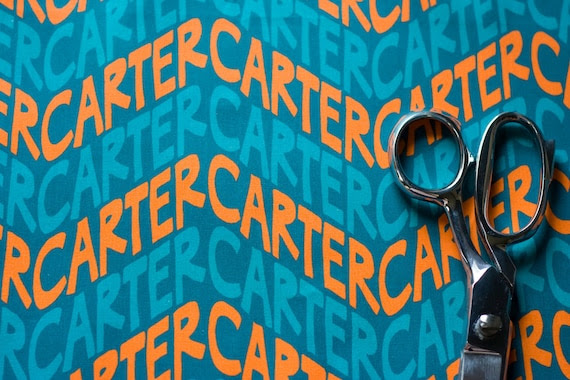 And Your Name Is? is an outgrowth of my fabric-design-love: I make custom text-based patterns in several different styles. Over the past year and a half, I have really enjoyed creating the individual styles, and seeing how they become even more unique when combined with different names! I also make custom tote bags, the purchase of which also gets you the digital files to use.

I've also done these designs for businesses, since the graphics can easily be modified into logos. As I move forward with it, I am excited to explore different possibilities- creating customized repeat designs for events like weddings, graduations, etc... 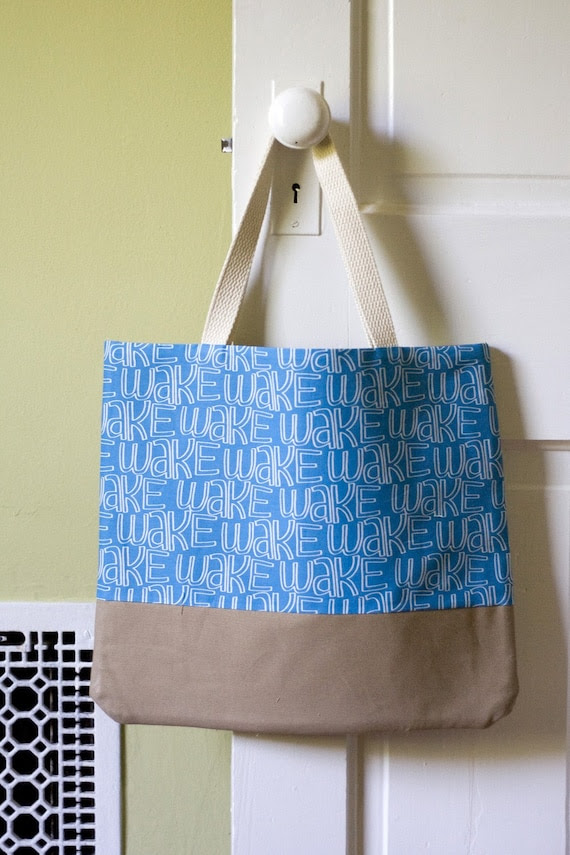 So, in honor of the "coming out" of the shop, I am going to do a bit of a sale! I know, I've been Saley McSalerson lately... Have I mentioned that my Mac is on it's death-bed? Pity, folks. 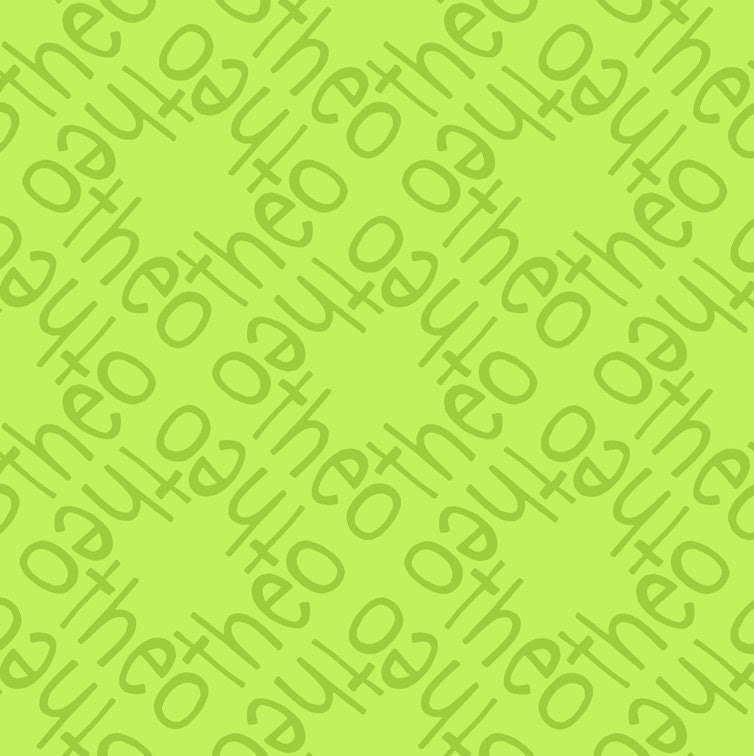 I'll put the deets (hilarious abbreviations!) of what you get at the bottom of the post- you pretty much get all the files that you would need to make everything you would ever want with the pattern- fabric (obvs,) scrapbooking paper, iPhone cases, laptop skins, and even shoes. You have unlimited personal use of your custom pattern, so get one for the kids and you can use it for the next 40 years or so... think of it as a post-modern family crest. 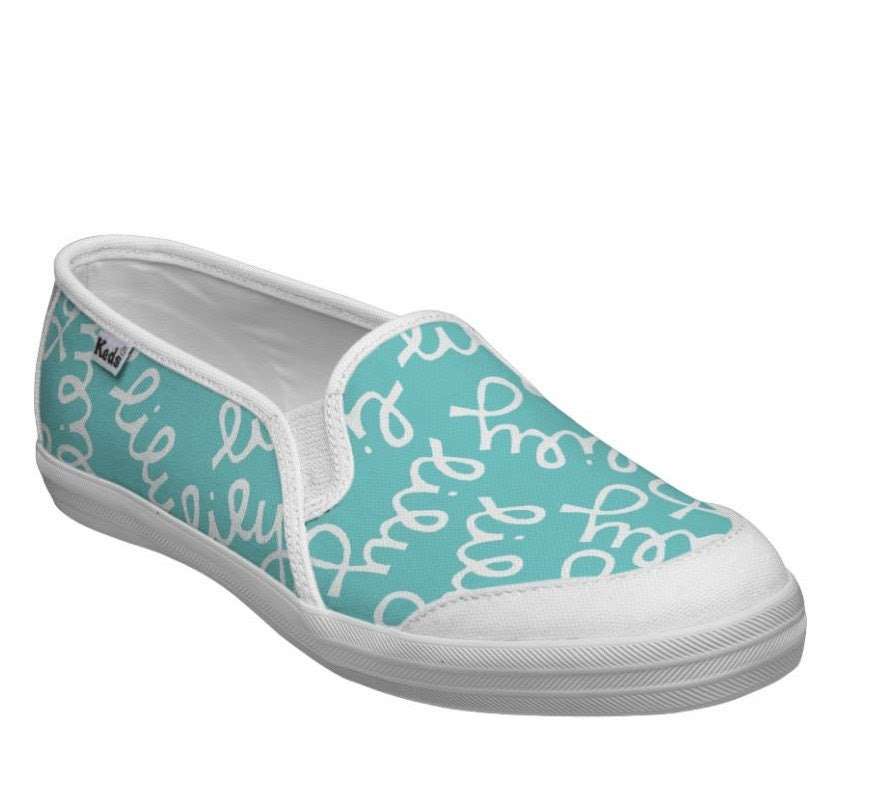 All this salesmanship is making me a little itchy, but I'm a big fan of this project, and think it's a pretty great way to make customized keepsakes. But, ya know, I'm probably biased. Have I told, you lately, that I love you? (I sang that last part. IRL.) 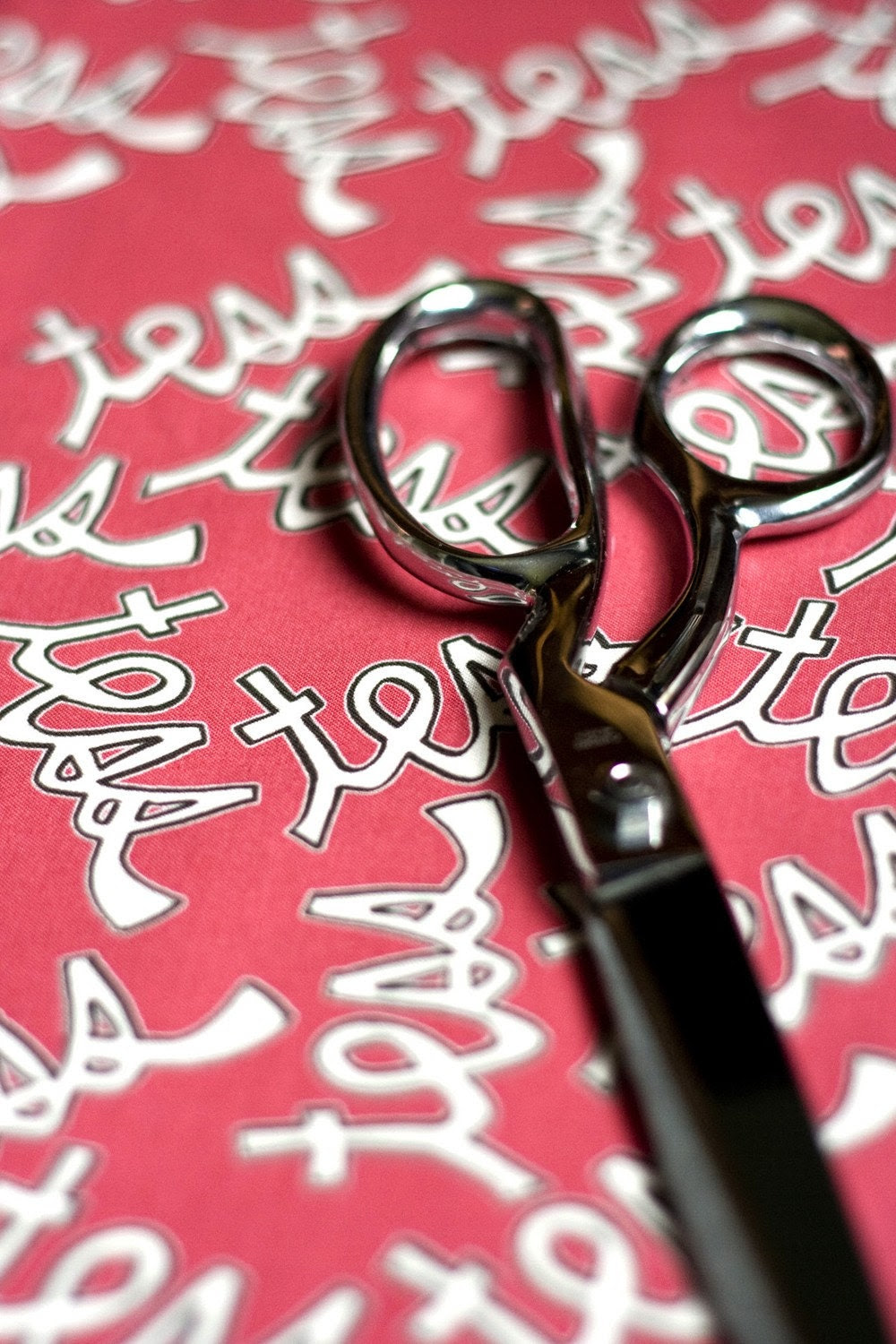 Info-rama!
Every pattern is hand drawn by me, scanned and put into a seamless repeat, giving it endless possibilities for digital use! Because I hand draw all my designs, they are completely unique- these are not files that can be smacked together with standard fonts, they are individualized works of art!This listing is for a digital file featuring your name, set up to be used as a seamless repeat, perfect for fabric, scrap booking, and other crafty uses; It does NOT include any of the physical products shown in the photos, those are suggested uses of the digital file. If you purchase this listing, you will receive:-A digital file, in three of your chosen color combination choices, in your choice of.jpg, .tif, or .png format.-The pattern in a format ready to be uploaded to the Spoonflower.com marketplace, where you can purchase it on a variety of different fabric types.-A 16"x16" 300dpi .png file of each pattern in repeat-An 8"x8" 300 dpi .jpg file of each pattern in repeat-An 8.5x11" 300 dpi .pdf file of each pattern in repeat-An email detailing ways to use the files for different applications.-Unlimited use and rights to your custom design, even for commercial purposes!You can optionally purchase additional color combination choices for $2 a color, as well as add additional names to a fabric (middle names or surnames) for $10 per name. 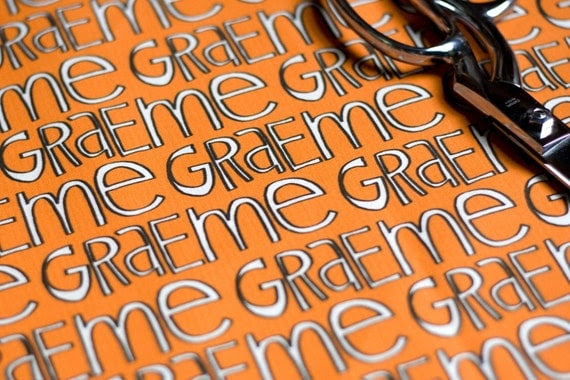 GO FORTH! BROWSE! PURCHASE? NO PRESSURE!
Posted by Auntjune at 2:09 PM 2 comments:

When people are all like, man, nature is cool, I think, yes, it is pretty cool. And maybe I get a mental picture of a mountain or a canyon or a rainbow, all of which are great. But, while they are great, and pretty, and would happily go on trips to see them, I do not get psyched about mountains or canyons or rainbows. I think I've been desensitized by the thousands of photographs I've seen of these things, which is awful, but, it is what it is.  I blame Successories.

In fourth grade, there was an issue of Weekly Reader* that I have still never forgotten, the subject of which was the Mariana Trench and the Things Down There. At that point, we knew a lot less about it, but it was still pretty mind blowing-stuff. I'm interested in the Highest Things (I will read or watch anything that has to do with Mount Everest; ask my husband; ask my Netflix queue), but the Lowest Things are really where it's at. Mystery! Depth! Things we shouldn't be seeing and will never see all of! It is awe-inspring in a way that even the best rainbow will never be.

It's like a whole ecosystem that was pulled directly from the nightmares of kindergarteners, and it is HAMAZING. If you haven't watched the BBC series Blue Planet, you really should do yourself a favor and at least watch Episode 2, "The Deep".  It's available on Netflix streaming, so you really have no excuse not to. Unless you don't have Netflix streaming, which, you should. Drop cable, pick up Netflix, save yourself a ton of money and forget what commercials are. It's awesome.

And, m'kay, check out this book, The Deep by Claire Nouvian, and take a gander at the gallery on her website. These photos are not only really incredible, but also completely terrifying. Try to ignore the completely obnoxious (and creepy) deep-sea sounds the site plays... I thought my computer was finally surrendering to the great beyond until I realized it was the site. Auto-playing sounds and music on websites! When will you be outlawed? Congress, please get on that.

Sadly, I have no interest whatsoever in donning SCUBA gear, as I would surely manage to die in the stupidest possible way, possibly 8 feet underwater. Thus, I am destined to experience ocean life in 2D for the most part. I have a hankering to go into as many caves as possible though, so I should maybe get a jump on that. Anyone want to teach me how to spelunk?


*I loved Weekly Reader. Like, I can still smell the ink and feel its cheap, pulpy newsprint texture. It was a MAGAZINE, that school BOUGHT us, and all we had to do was a few lame fill-in-the-blanks! I desperately hated making a mistake though, because if you had to erase, the surrounding print would  come off and no matter how gentle you tried to be, you would shred the paper. Oh, the blemished and torn Weekly Reader, oh, the ire and shame!


PS: Thanks for all the support on the 2012 agenda; I'm glad I'm not the only dirty hermit in blogland. Also, will make sincerest effort to blog with greater frequency- have a few projects nearly completed that I will be blathering on about in the most excited way. Also, thank you for reading the blather in the first place, let alone being willing to read more!
Posted by Auntjune at 10:08 AM 5 comments: