Ah, I love you guys. Thanks for all the input on the last post. I am going to take your advice and email her, but I will wait until I have actually MADE some more of the pillows. I am all over the place this summer, hopping from one project to another, and I get behind on posting them here. This past week was husband's vacation, so most of my time was spent enjoying his presence, and not a lot of creative work got done. We bought a bed! We got Rufus to swim! We did some other stuff that will be mentioned in subsequent posts! But no sewing. Whatever. 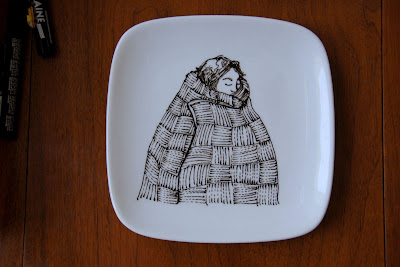 Today, however, I did manage to get out my old friends the paints, and do a few plates with a design I had been working on. I have a few quilt-related sketches that are probably going to make their way onto plates, and these are the first two. Typically I do the black outline and then paint in the colors, but after I did these I realized I really liked them without color. I might do a few more and rainbow them up, but I thought the lines were really enough on these. 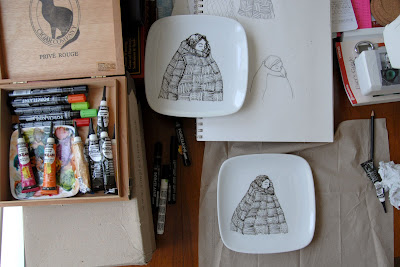 Anyway. They're etsyfied, get them while they're hot. Or something.
PS: Does anyone else physically drool when Made by Hank puts new bags up? Especially the big ruffly shoulder bags? I do, but since they are always gone within, like, the half hour, I do not have time to be tempted by things my unemployed self can't possibly afford. 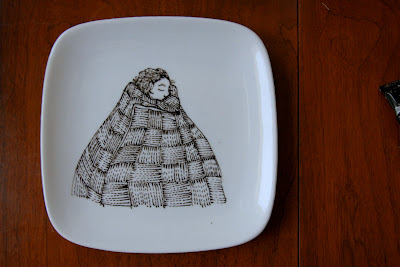 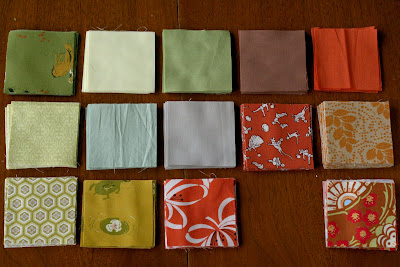 Yay, I'm glad I'm not the only "free-spirited" (ahem) quilter out there! So, you know when you learn some new sewing trick, and you just can't wait to do it and so you drop all other projects that you really SHOULD finish to do the new thing? Yeah. Check this out. Seriously, immediately had to drop everything and make a patchwork pillow.This one has already been given away to someone whom I owed a pillow, but I am going to make more. What I haven't decided though, is whether to put them in the shop. I feel like it is a bit of an ethical dilemma, because, yeah, I know Alicia Paulsen (who, by the by, is the reason I started reading craft blogs, and then started my own craft blog, and is a minor deity in my eyes) didn't invent the patchwork pillows, and I know mine will be nothing like hers, and I know that probably I won't even sell any, but I feel WEIRD taking something someone else sells, and showed me how to make, and then trying to profit on my own version. Is this kosher? Is that sentence even remotely understandable? Opinions? 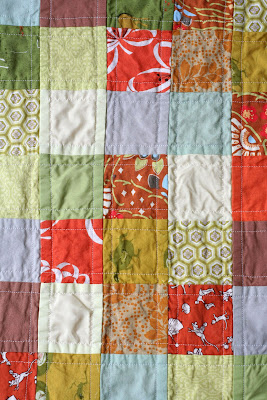 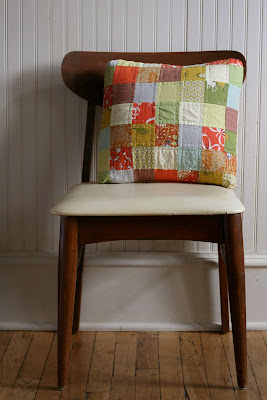 Anyway. I loved making this, I loved picking out and arranging the squares, I loved quilting it (though I think I might do some wilder quilting on my next ones,) so I am a happy happy crafter. Pillows! 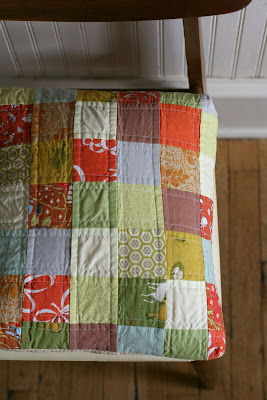 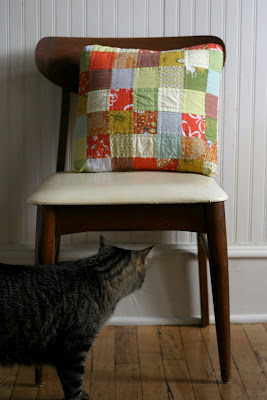 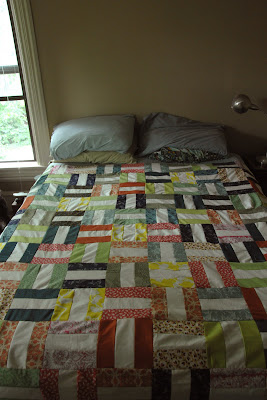 I pieced it! It was hard. 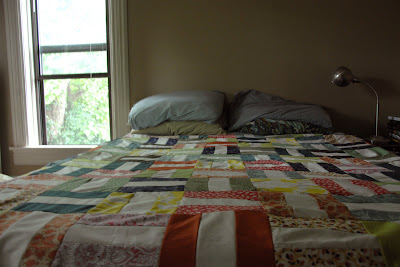 I don't know if I've mentioned this before, and I am too lazy to check and see if I have, but I am a sloppy, sloppy quilter. Or, anyway, a sloppy quilt-piecer. I don't really cut anything super well, I never square anything off, and I never, ever use pins. I used to, and then I got lazy and decided that if I couldn't pull it into place it didn't deserve being there. Or something like that. Really, I'm just lazy. But anyway, all this is fine and good, until it comes time to shmack the whole giant quilt top together, and then, my friends, I pay the piper, all day long. Anyway, I wish I could say I learned my lesson, but I seldom do (learn lessons,) and I am sure it will be the same next time, but kiddies, remember this tale, and heed my warning:
Uhm. Do things right, and your back will hurt less than mine does now. 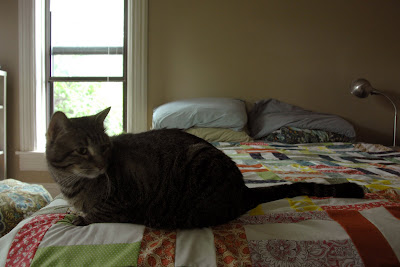 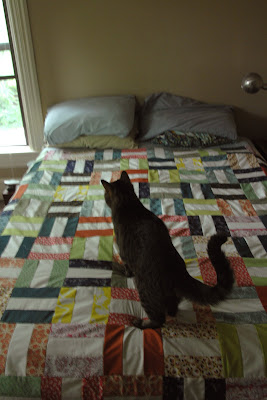 I like to play ghost with my giant quilt top. Doesn't everyone? 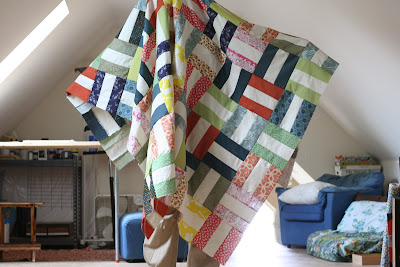 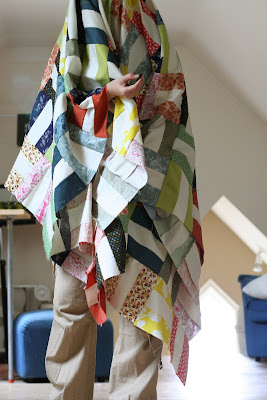 On Licorice, and Taking Photos in Public.

Licorice, that sounds much better. I mean, not to eat, it's still disgusting, but spelling wise. Oh, wait, are Twizzlers supposed to be licorice? Because I do love me some Twizzlers. But be careful, licorice lovers! According to the BBC, you can OVERDOSE! (See Rachel's comment on last post.) Dangerous stuff. 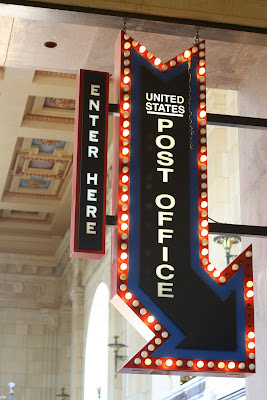 So anyway. Today I was at the post office, which I hate, I hate hate hate going to the post office, which is why I did the Click and Ship thing, and was then told by friendly usps.com that they would NOT pick the package up at my house, totally negating the whole clickanship POINT! but, whatever, so, I was at the post office. Which I hate. But I realized, while I was there, that I am actually really lucky, because, "my" post office (the one geographically closest to me, not the one I own,) is really pretty. It's the one inside Union Station, and it's just fancy, so I told myself to stop being a whiny little baby and enjoy it and take some pictures. Which, was supposed to be the point of this post. Hm. Brevity, soul of wit? 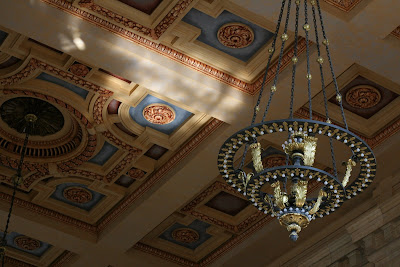 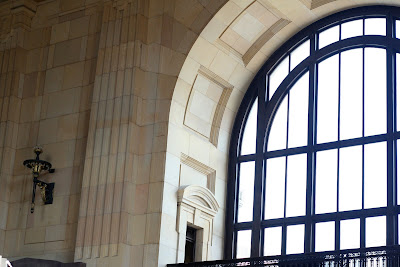 Anyway. In college I took my camera everywhere, I was a student and I had an excuse, and so I have about a million pictures from back then, and I like that. But at some point after college it became embarrassing to carry around the camera all the time, and heavy, and I lost my nerve. I think one of the contributing factors is that if you have a small, easy camera, it is easier to do, but I have silly, bulky cameras, and so I feel not only like I look like a dork, but also that the expectations are that I might actually be taking "good" pictures. Which I'm not. Is this going anywhere? No, not really. But I'm going to try to take more pictures, even if it is only in the Costco parking lot.
Crafts?
Posted by Auntjune at 2:50 PM 7 comments: 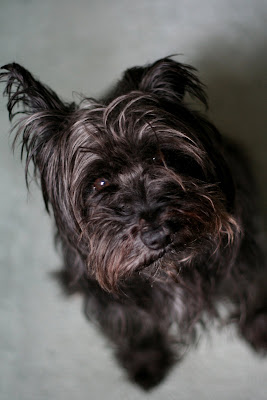 So. The Allsorts* quilt has yet to be pieced, but I have moved onto another, more pressing project: teaching the dog to run next to me while I ride a bike. Yesterday I gave him a haircut (1st picture to 2nd picture...can you see a difference? Probably not. I didn't say it was a good haircut.) and today we were outside for an hour with me trying to emphasize the importance of the "RIGHT!" command. Meaning, "Stay to the right of the freaking bike, or you will get runned over, hard!" but that is too long for a dog to understand. Anyway, at this point the poor dog is probably wishing I was back to being somewhere else during the day, so he could just sleep in his crate without being harassed and haircutted. Oh, summer, what will I do with you? 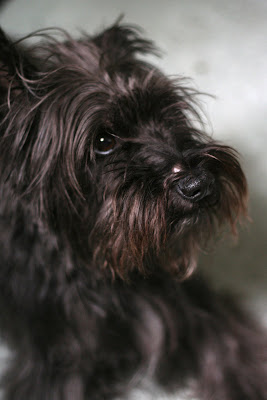 *Thanks, Evelyn! All the suggestions were awesome, but I remember those bags of liquorish, too, even though I never ate them because, ew, liquorish, gross. It doesn't seem possible that that can be the correct spelling for the word, but blogger says it is, and who am I to question blogger spellcheck? Nobody, that's who.
Posted by Auntjune at 3:38 PM 6 comments: