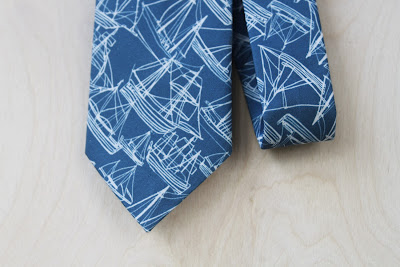 Ok, so I have SO MANY POSTS TO WRITE, like, a million, about market and about fabric and my birthday and painting the dining room and awesome quilts other people have made with my fabric, but I have been supa-busy and, let's face, it, fairly lazy, but I wanted to pop in to show you something awesome. 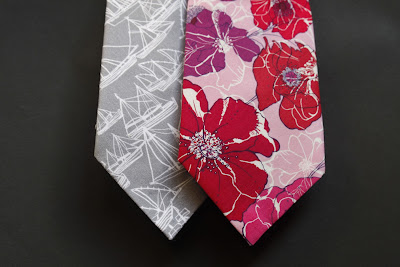 Jenny Rinzler of this humble abode (formerly ciuccio) has been awesome on etsy for FOREVA, but recently switched her focus to making excellent ties, some of which are made EVEN MORE EXCELLENTER (biased opinion here) because they are made of my fabric! Anyway, Jenny was recently featured by the San Francisco Chronicle! (Does Jake Gyllenhall still work there? It was only a movie? Whatever.) Take a looksie at the article and the fabulous drool-worthy ties she makes, and then stop over to marvel at this little post, which warms my heart's cockles immensely.
Check out her shop, and buy your loved ones some awesome ties that are a million times cooler than anything you will ever find at the mall. Make your dad a little cooler this holiday season! 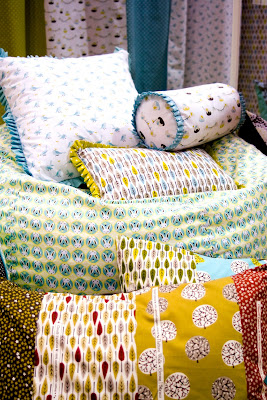 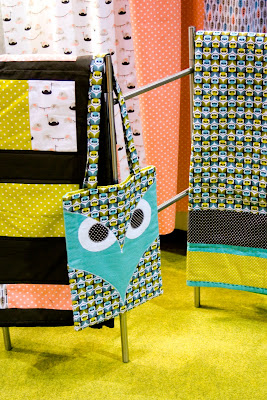 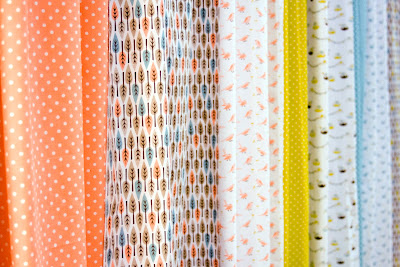 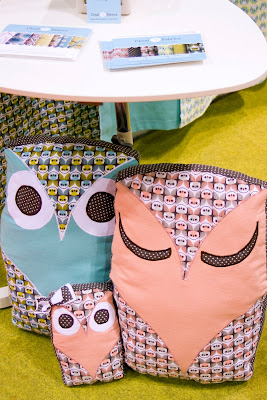 Cloud 9 my friends. It smells and tastes and feels as good as it looks. Which, I think, should be their new slogan. I'm sure everyone has already heard about their Designer Series, but HAVE YOU HEARD ABOUT THEIR DESIGNER SERIES? Julia Rothman, Heather Moore of Skinny LaMinx, and Geninne Zlatkis are all doing collections on Cloud 9's organic fabric! Also, It's going to be another price sensitive collection, so great organic fabric for under $12/yard, so that's awesome. I personally am really excited for the Nature Walk collection, which I am going to try and get at Harpers. KC folk, you would buy sweet organic fabric from us if it were under $12/yd, right? RIGHT? H'Anyways, Michelle was really, really nice, and the booth was beautiful, one of my favorites at market. The owl tote bag? I had seen it on interwebs, but it is even cuter in person. I briefly considered stealing it, but I already had enough to shove in my suitcase, and also stealing is bad? NEXT! 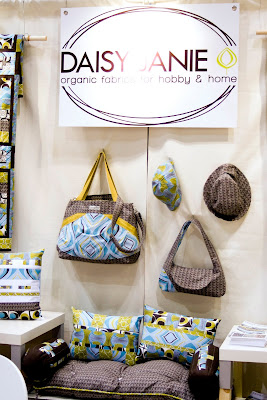 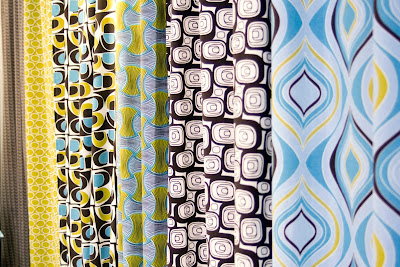 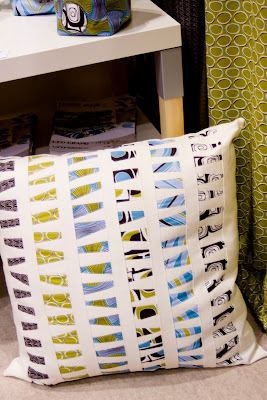 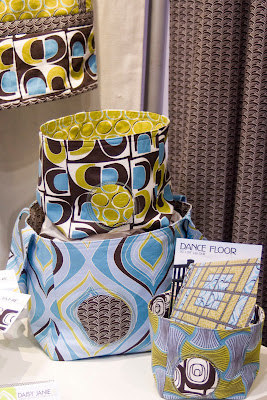 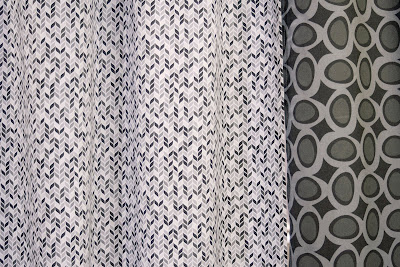 Daisy Janie, another fabulous organic company! Jan was really awesome, and her booth won an award, which makes sense because it was great. There were a ton of really cute bags, as well as the Square Dance quilt, and a couple of adorable fabric boxes from Smidgebox. Their new Shades of Gray collection is pretty brilliant, because who doesn't love gray prints? And, ps locals, Bon Bon Atelier just got some sweet Geo Grand bolts in the other day. I am oogling the ogee print for another Birdie Sling.
Delicious market morsels, there are so many more of them to share!
Posted by Auntjune at 7:12 PM 7 comments:

Alexander Henry makes me die. Like, I want to live in their fabric. Look at these pictures and tell me you don't want to live there too. 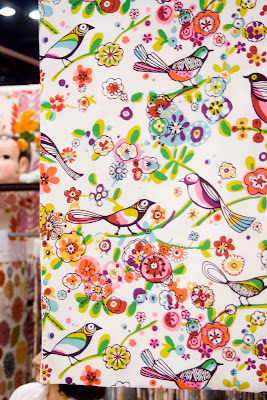 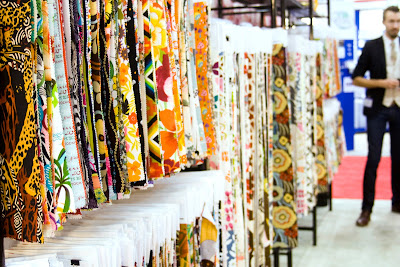 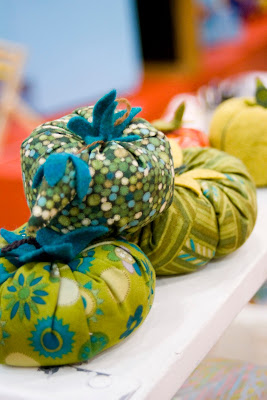 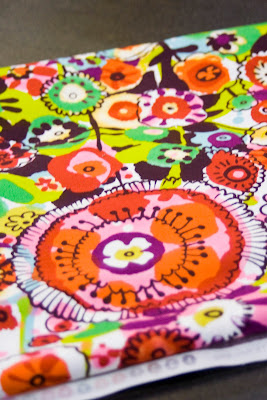 I breifly discussed Halloween costumes with one of thir friendly sales-folk. He had planned on being Vincent Price, but forgot his costume, and so he just waxed his mustache, which was pretty fabulous. I told him I had wanted to be Rachel Zoe but was afraid no one would get it. (Also? Why? Because I love her, a little.) Then he told me that before he realized Market was on Halloween, he and a friend had planned on going as Rachel and Brad! Anyway, fairly boring story, but it was nice to know that one person would have appreciated my Zoe-ness. If I had done it, that is. 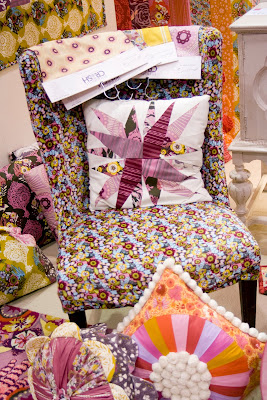 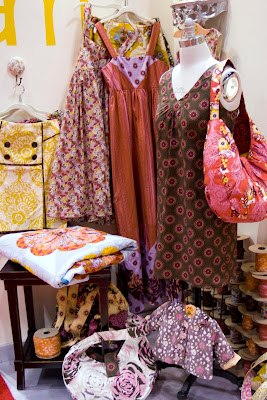 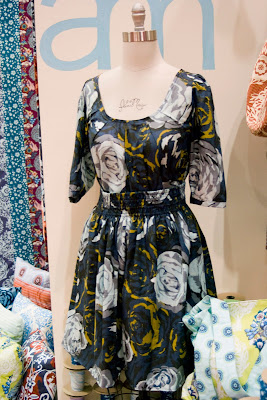 Anna Maria Horner, anyone? (Have you picked up on my super-secret system of organizing these by alphabetical order by initials? I'm fancy.) So, her booth was really fabulous, and she was very funny, although I don't think I ever spoke to her directly, because I was scurred. BUT, also present in her booth was her assistant/seamstress/rockstar, Alexia Abegg. Meeting Alexia? HUGE deal for me. I was almost more dorky with her than with Amy Butler. The first quilt I ever made was based on one of Alexia's, and her blog was just a GIANT part of me getting really into fabric. It's a small world, this quilty one, and I really love it.
That's all for tonight, kiddies. Mama is going to go microwave her sammich.
Posted by Auntjune at 4:40 PM 3 comments:

The idea of writing one big Quilt Market post has been looming over me for the past, oh, week and a half, and it is INTIMIDATING. Because market is LONG and AWESOME and TIRING and OVERWHELMING and INSPIRING and TIRING AGAIN. I just finished editing my pictures today, which is ridiculous, but I took 500 photos, and now that I look at them, I keep thinking of things I DIDN'T get pictures of. There's just that much stuff. It's insane. And the people! I met so many amazing people, some who I "knew" from the interwebs, and then about a million more that I didn't, and the people at Quilt Market? They tend to be awesome. I'll try to remember all of them an give credit to their particular awesomes, but I will probably fail. Also, I don't really take pictures of people, (They MOVE! It is frust-er-ating!), so you will have to imagine what they look like, or google them. But the people are a big deal, and one of my very favorite people, ever? Kim Kight. Of Trueup.net. Who is awesome, so much so that I actually thought to take a photo of her awesomehood. 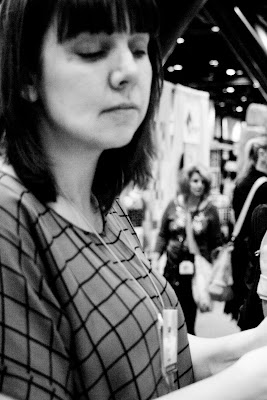 I mention her first because I was lucky enough to be her market buddy, and because she was suuuuper nice and let me hang around her when she was meeting with fancy people, and she didn't mind when I followed her around like a lost puppy. Because for the first, say, hour and a half? I was a lost puppy. Thursday was the Schoolhouse sessions, where designers give little presentations about their lines, and other people give presentations about quilts and such, and for the first few sessions, I was walking around alone, feeling like the opening sequence of a teen movie about a new kid in town. It was a bit pathetic, and I started to think I would never meet anyone, and would spend all of Market alone in my crazyness, walking around with my head down like the kid who keeps Magic the Gathering cards in their pocket. (Sorry, people who like Magic the Gathering. Do you still exist? I'm feeling very high-schooly at the mention.) BUT THEN, I am standing waiting to go into Bill Kerr's schoolhouse, and I look over and see the most beautiful nametag ever! Kim Kight! And so, like most freaks, I say Oh! and hug her. Before introductions. Because that is how I roll. And then I intriduced myself, and we hugged again. And she's SO CUTE! And funny! And really, I should end this section, because it's making me sound all freaky-deaky, but it was just the BIGGEST relief to be market-buddied, and know I would not roam the red-carpeted halls all on my lonesome. But anyways. ON TO THE FABRIC! 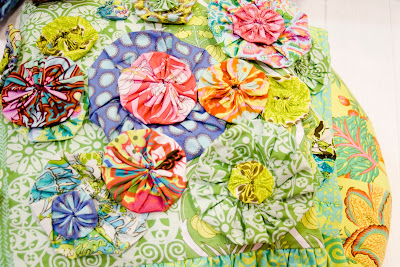 Of course, first has to be Amy Butler, because she's Amy Butler, and that's all there is to it. I met her when Kim and I were going to her Schoolhouse, and she was totally as nice as everyone says. And as tall as they say. She asked me if I knitted my vest, which I didn't knit, and then, like the dork that I am, I told her I got it at Marshall's, because Amy Butler TOTALLY CARES where I got my vest. BUT she said she liked my birdie sling! And then I gushed about how great the pattern was, and eventually she had to turn away from my gushing and go present her schoolhouse, which was great. Because the new stuff (Soul Blossoms) is pretty great. We ordered all of it at the store, so expect it in KC in December, my friends. And now, gratuitous booth shots. 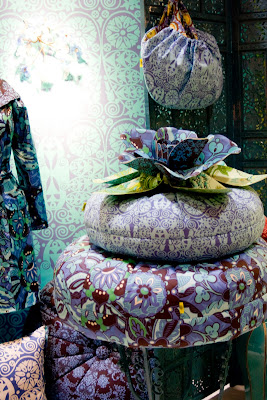 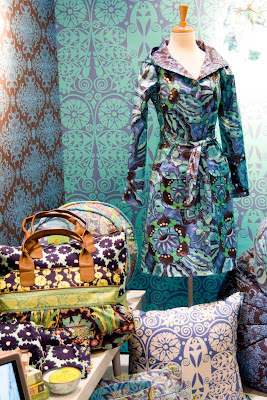 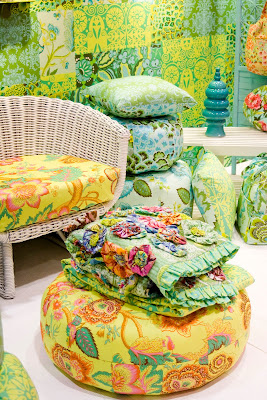 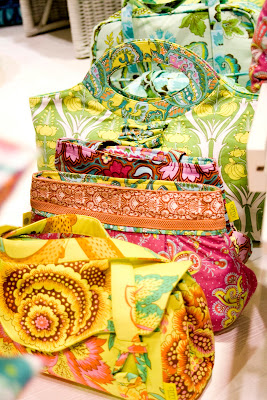 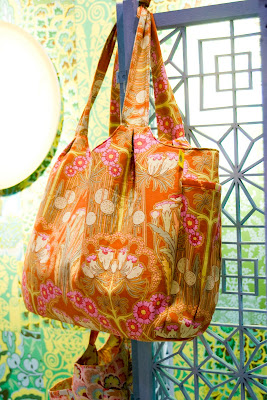 Is that enough to make your head spin? This is only post one, my friends, there is still SO MUCH MORE.
Posted by Auntjune at 6:19 PM 7 comments: