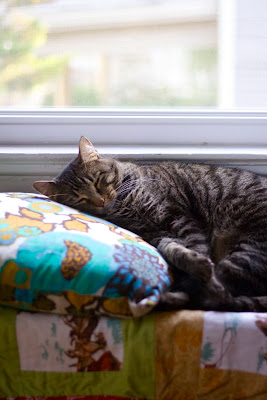 I have a bigger better blog post for you, my beloved, but it must wait a bit, the forces of time an the internet are against me. I wanted to say hi, though, and tell you you look pretty today. No, really. And your hair looks good. Those pants, they really fit you well. Back with more, soon, including some giveawayness. In the meantime, look at my cat.
Posted by Auntjune at 3:21 PM 14 comments:

I just got it. It's awful. It's cry-all-the-way-home and then cry-more-in-the-shower and then cry-a-bit-more-in-the-mirror bad. It's just SO SHORT and took me SO LONG to grow this sad little bit of hair. I asked to still be able to put it back. Is that not the oldest request in the book? And if I try to pull ANYTHING back, it just slips through my fingers. Nothing there. And it's horrible.
So I'm shamelessly using you. Tell me stories that are worse, please? This is maybe 4-5 months worth of hair, and I am crying like a baby, so now I TOTALLY get why all the girls on ANTM cry when they cut off their 3 feet of hair. It HURTS.
STORIES, PEOPLE.
NOW!
I'm off to wade in self-pity, and maybe do a bit more ponytail-less weeping.
Posted by Auntjune at 1:16 PM 55 comments:

Trips! From a Long Time Ago! And Fabric That I Bought!

So, a million bazillion years ago, I got to go to Jacquie's house, and it was awesome. Here are pictures, and a bit of narration. 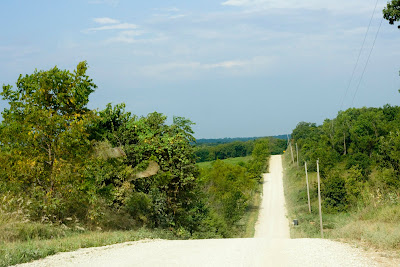 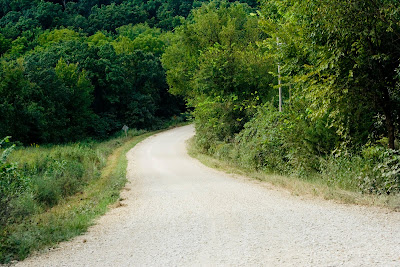 This is the road to Jacquie's house, it is windy and hilly, and not unlike Arkansas. She lives in the Arkansas part of Kansas, which I didn't know existed. Anyway, it was an ADVENTURE, and even more of an adventure when I got to drive out, later, during a rainstorm, in my Suzuki Forenza. Which is not a car that is build for gravel roads and bad weather, but I survived, and need to get back to the point, which is, THIS IS THE ROAD. A lot of nonsense already, and this is just the first set of pictures. 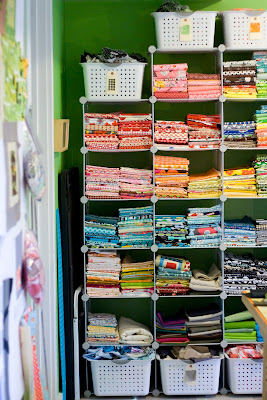 So, Jacquie has a lot of fabric. I touched it all. Her house is AWESOME, also, and I didn't take pictures, but she has a giant front porch with these hammock-y swing things that I want to live in. Also, living in ArkansasKansas is kindof beautiful, and has lots of pretty views and such. Which I failed to photograph, because I was busy touching all her fabric. 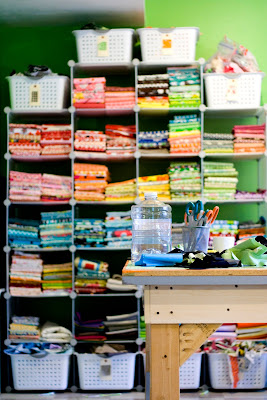 She is lucky I did not lick it. 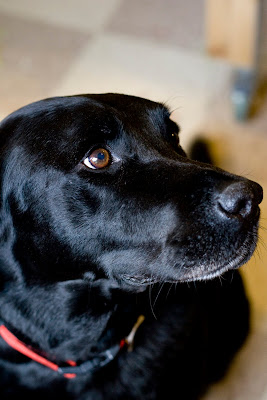 This is Bruno, Jacquie's studio assistant. 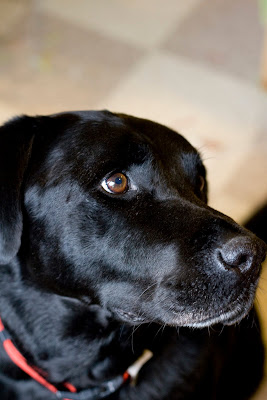 He is very helpful, if you need a small-horse-sized dog to lay on the ground next to you. 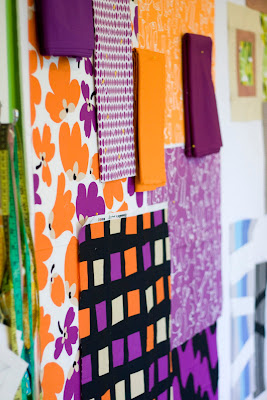 This is a quilt that Jacquie is going to make and I am SPOILERING it! But she said I could, so. It has my birdies!!! 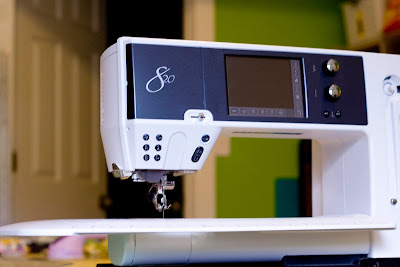 This is Jacquie's machine, which is a thing to be revered.
So, h'anyways, we had a bunch of stuff, and sewed and chatted and it was fabulous, and THEN, two days later, I had one of the most fabulous fabric experiences of my life. If you live anywhere around the KC metro/Lawrence area, you know Sarah's. 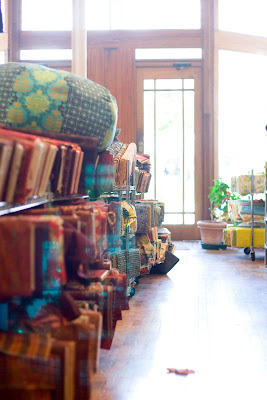 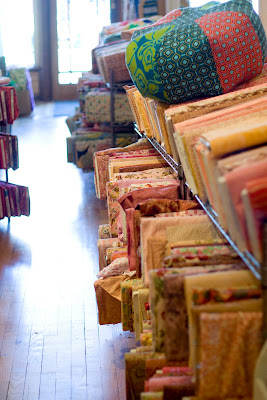 I had been told FOR YEARS that I had to go there, but I never managed to get there until recently. I went with a few of my fab KCMQG kids, Jaime and Jenny, and we met Jacquie there. 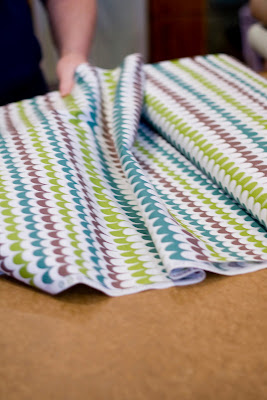 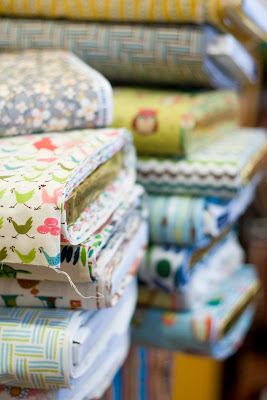 Drool, friends, at the massive stacks of fabric, and I just BARELY scratched the surface of all the boltage. Not bringing a wide angle lens was a sad mistake. I showed some serious restraint, and made out with a good selection of goodness for not tooo many moneys. 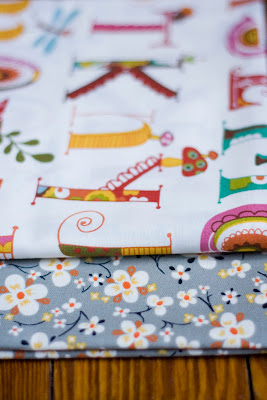 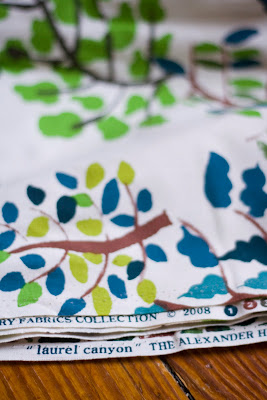 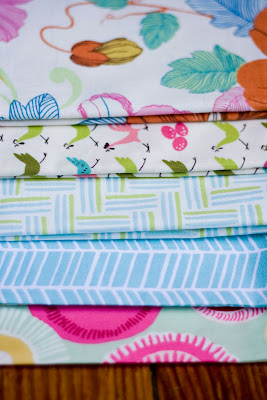 It's an amazing place, though, and I know I could get lost in there for hours if I didn't have people to pull me out of fabric-touching mode.
Guild "Sewing Saturday" was a few weekends ago, as well, and I left the fabulous Harper's with a small set of FQ's as well. I still remember the first time I went into Harpers a few years ago, being totally amazed by HOW MUCH FABRIC a quilt store has. It was a news flash to me at the time, because I had never been into a TRUE quilting store, it was my baptism into the world of fat quarters and WALLS of all the quilting cottons I could imagine. It was joyous. 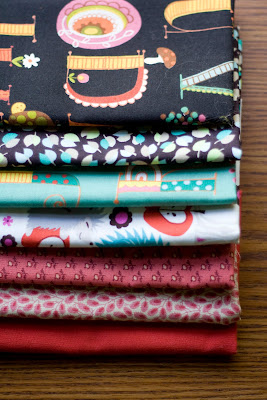 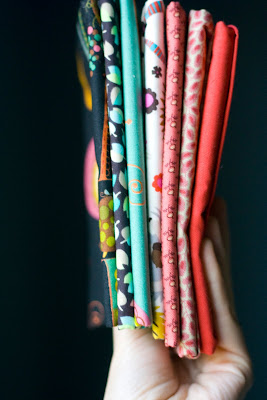 Long story short, I now have more fabric. Is anyone surprised?
PS: What is this hedgehog doing to this apple? No, do not tell me. I do not want to know. He is certainly confused. 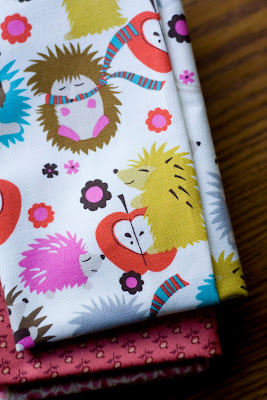