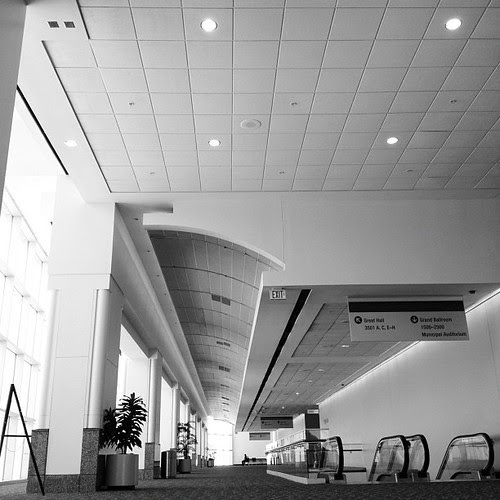 Ok, so I read somewhere, on someone's blog probably, that one of the most annoying things bloggers can do is apologize for not blogging more. I'm going to embrace it, because I'm lazy. That you have been neglected, though, has not been for naught: I've been working on many a secret surprise project, friends. Don't try to guess because even if you guess correctly, it's still a secret so I couldn't say, oh, yes, you're correct! I'd still have to be like, hrrmmm. And maybe you would guess something way better than the secrets actually are, and I would realize my secrets' inferiority, and be sad.

So I planned on updating from Quilt Market. I really did. But then on Saturday, I put my iPhone in one of my shiny new messenger bag's many pockets, and twenty minutes later, it was gone. And it was turned off. Tricky tricky phone-thief. And I spent the rest of the day running around and being generally crazy and weepy, and at some point discovered that, the pocket? Which I had been keeping books and notepad and pencils in without incident? NOT A POCKET. Moral of the story: Make sure pockets are pockets, and not just holes through which suitcase handles can go. You win this round, Timbuk2. The first round of the game no one wants to win.

Don't cry for me, though. Friends: make sure to put your electronic thingamajigs as riders on your home insurance policy, (I recommend Travelers WHOLEHEARTEDLY!), because if your shiny doodlebobs are taken, it will save you MUCH moneys. Like, $700ish. And I did live, I think for more than a month, without a cell phone. It was itchy. I had a google voice number that I could use whenever I was in range of wifi, with old-brokey-phone, and while it was functional, you know... It wasn't. I was allthetime thinking about how I was going to get in a wreck and then be attacked by bears and then taken by hill-people, and no one would ever know.

Was I going somewhere with this? Ugh, I have forgotten. I think the point was, I'm back! Get insurance! Drive safely! Or something like that. Some day I'm going to blog about safe driving habits, and when I do, you will all see what a big wad of crazy I REALLY am.

Oh, and I did some bloggies for Kim at TrueUp.net, so gahwawn ovah theyah* and check THAT out.

*I don't know why, but autocorrect occasionally goes into a poorly executed, over-exaggerated southern dialect mode. I think the setting is called "Community College Tennessee Williams". Is that just on mine?